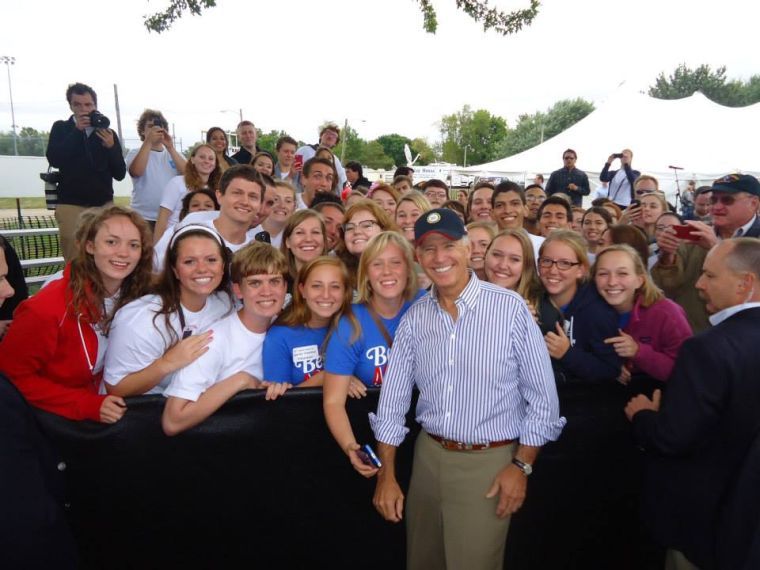 Senior Dillon Thiner attended the Harkin Steak Fry and said the event has developed into one of Iowa’s main political functions on the Democrat’s side.

“This year, it’s a little different being that Sen. Harkin isn’t going to run another year,” he said.

Biden praised Harkin at the steak fry. The Des Moines Register said Biden emphasized Harkin’s accomplishments in the early 1990s with the passing of the Americans with Disabilities Act.

Under the Americans with Disabilities Act, the law changed how the public handled disabilities. Handicapped accommodations were required in public areas.

Biden also talked about what the Democratic Party has done, the future of the party and the short term plans for the future.

“What I took away from it was more on the fact of what the accomplishments are and what the struggles will be,” Thiner said.

Thiner said although he resonated with many parts of Biden’s speech, there were parts he didn’t necessarily agree with.

“There were statements (about how) the Syrian conflict is done, it’s over, which I disagreed with,” he said. “Things aren’t that easy. There are a few things I agree with him on, such as equal rights and things like that.”

Sophomore Tessa Lengeling said the Harkin Steak Fry reminded her how much she loved politics.  Lengeling volunteered with Rep. Tyler Olson who has announced his race for Iowa governor and serves as his campaign’s co-chair on Simpson’s campus.

“I realized how down to earth some of the politicians can be,” she said. “You know, sometimes you think they’re glamorous, have so many things going on or they’re too busy to talk to you (the average American), but at this event, they really were personable. They would come up to talk to you. Vice president Biden was taking pictures with everyone.”

Sophomore MacKenzie Bills is vice president of Simpson Democrats and also volunteered with the Tyler Olson for Governor campaign. She spent her time at the steak fry talking to constituents to gather signatures for his name to get on the ballot. For her, the event showed how Iowan politicians have the respect of citizens across the nation.

“If the vice president of the United States and San Antonio mayor will come all the way for a small-town political event, then he must be something special,” she said. “Iowans are in a great position every four years. They influence the future of all aspects of politics and so each Iowan voter is important.”

Lengeling said the politicians at Harkin’s Steak Fry empowered middle-class citizens such as herself. Biden also talked about how he wants to work with students on loans and how the youth vote matters.

“We’re not wealthy by any means, so I appreciate them working for the middle-class and trying to expand it,” she said. “I hope the (Harkin Steak Fry) shows students that these politicians do care about student issues and you know, the youth vote. I think it’s great that they came to Indianola.”