Behind the Athlete: Taylor Nelson 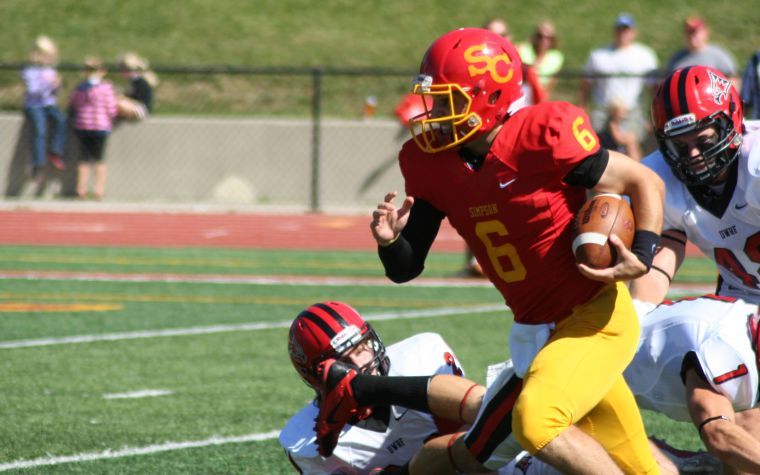 From freshman year to senior year, four-year starter at quarterback Taylor Nelson will walk away from Buxton Stadium with fond memories of a career to remember.

All his life, senior quarterback Taylor Nelson had high hopes and aspirations of playing college football.

The crazy thing is, however, is that Nelson transformed himself to the quarterback position his junior year of high school after spending the majority of his football career at running back. That move, though, is something that Nelson is thankful for, and he knows is the reason for what gave him that opportunity to play college football.

“In high school, I only knew of friends going to play at the Division I level,” Nelson said. “I wasn’t sure what Division III football would be like or if I wanted to even play at that level.”

Nelson came from a perennial, powerhouse high school football program in West Des Moines Valley, winning the Class 4-A State Championship title his junior year. As a recruit, Simpson scouted and recruited Nelson. Taking an official visit on campus and getting to know the team, Nelson fell in love with the program and committed to the Storm.

“A great coaching staff recruited me and I am glad I made the decision I did,” Nelson said.

Starting at quarterback since his freshmen year, Nelson has always shown tremendous growth in both experience and abilities under center. He has never missed a game, starting all ten games his freshman, sophomore and junior campaigns and will look to do the same as a senior. The three-year letterwinner and two-time second team all-conference performer has rewrote the Simpson football record books, and will more than likely continue to do so as the Storm head into week four.

Most recently, Nelson became Simpson’s career leader in passing yards after a 28-21 loss against week two opponent Gustavus Adolphus. Nelson surpassed Mike Donnenworth, who played under center for the Storm from 2000-03 with his 7,370 yards. Nelson reached 7,378 yards once the fourth quarter horn blew.

To be honest, Nelson didn’t even know he had broken the record until someone said something to him about it.

“I owe it all to my coaches and teammates for putting me in a position to help the team achieve our goals and win games,” Nelson said.

Nelson’s career touchdown to interception ratio: 61 touchdowns versus 34 interceptions thus far this season.  In Simpson’s three games played into the 2013 season, Nelson is 60-88 passing, completing about 68 percent of his passes thrown to receivers. He has thrown for 670 yards so far, averaging 222.3 yards per game in the air.  Nelson currently has eight touchdown passes against four interceptions, with his longest pass being to senior wide receiver Brad Vogel in the Storm’s 2013 season opener against Iowa Wesleyan of 79 yards.

To Nelson, Vogel is one of the best wide receivers he has ever had the chance to play with.

“He is our game changer and secret weapon. The man does it all,” Nelson said. “There is no one else out on the field that we play like Brad. I’m just glad I don’t have to play against him.”

Vogel was recently tabbed as the Iowa Intercollegiate Athletic Conference Offensive Player of the Week after his contributions to Simpson’s 35-34 victory over the University of Wisconsin-River Falls on Sept. 21. Vogel caught eight of Nelson’s passes, which was good for 115 yards and a trip to the end zone. His touchdown catch was a 73-yard hammer that gave Simpson a 29-28 lead in the fourth quarter, sparking momentum and life for the Storm. The three-time letterwinner and 2013 Preseason First Team All-American has been Nelson’s go-to guy, catching 20 of his 60 passes, good for 273 yards and three touchdowns. The senior wide receiver is averaging 13.6 yards per catch and leads the conference in all-purpose yards per game with 150.67 and yards per kickoff return 25.3.

Despite having a high prolific receiver in Vogel, Nelson said to never count on the other guys in Simpson’s receiving core: seniors Ryan Olson, Mike Kuhn and junior Nate Connealy. Olson has 10 receptions (120 yards) with one touchdown grab, Kuhn with eight receptions (96) and a touchdown of his own and Connealy with six receptions (55) and one touchdown.

“We have a bunch of dudes that I am glad that bring a lot of speed and athletic ability,” Nelson said. “I feel with the guys we have, we can hurt teams with our speed.”

Nelson added that when the defense try to key in on Brad too much, the Storm have guys that are just as capable of making big plays.

“It’s a group that has grown with me and gets what direction we are headed,” Nelson said. “This receiving core is a very unselfish group that just wants what’s best for the team and to win.”

That direction the Storm are heading for: an Iowa Conference championship. It has been a goal Nelson has had eyes on since the day he step foot on campus.

“With our progress over the past three years, we as a team believe it can be done this year,” Nelson said.

Simpson is off to a 2-1 start and Nelson believes he and his teammates are getting better each week.

“Obviously, we are still cleaning up a few things, but I think we are in a position to do great things and get better as well,” Nelson said. “We are just focusing on taking it one game at a time.”

Being on a bye this week will give more time for the Storm to focus on its first conference game of the season against Wartburg College on Oct. 5. Nelson explained that the Storm are going to have to play extremely well if they plan to steal a win away from the Knights come game day. Wartburg is currently 2-1, coming off a huge 27-10 win over Carthage College on Sept. 21.

“Wartburg will not just lay over for us,” Nelson said.

“Each year that I have been here, we as a football team have progressively got better, which is exciting,” Nelson said. “I will remember the unity with the football team and the school, and this has been such a great place that gave me an opportunity to live out one of my dreams and to meet some great people along the way.  I will never forget this.”

Until that time comes, he is just going to take everything one game and one day at a time.

“I’m not sure if I will try and play football after I am done here at Simpson, but I know off the field, Simpson has set me up to be great when I leave here. I guess I will know when that time comes, but right now I am just trying to enjoy what little time I have left,” Nelson said.

Simpson will travel to Waverly, Iowa on Oct. 5 to open its conference campaign against Wartburg. Kickoff is slated to begin at 1 p.m. Follow @SimpAthletics on Twitter for tweet-by-tweet updates of the contest.