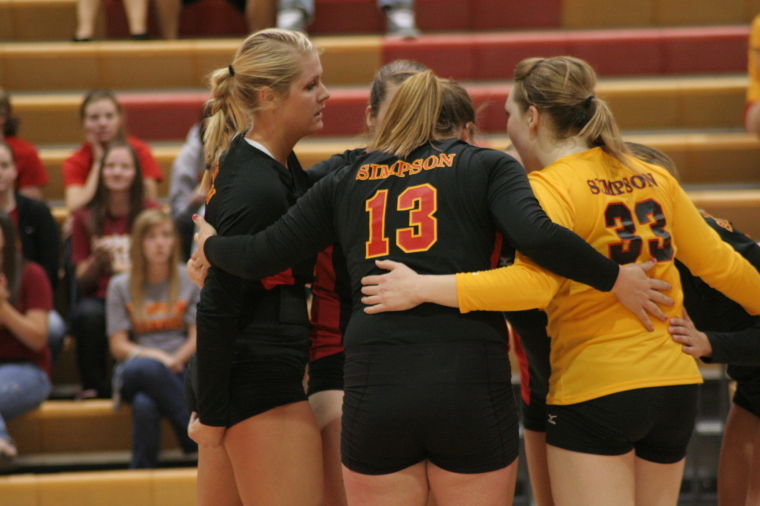 The Storm (14-6, 2-3 IIAC) will compete at the Augustana Pumpkin Bash on Oct. 25-26, hosted by Augustana College (Ill.). Simpson will go up against three other schools at the two-day tournament, including Wheaton College, Carthage College, William Penn University and tournament-host Augustana College.

Simpson has been on the decline in the month of October after winning all but two matches in September. Nonetheless, the Storm find themselves ranked fourth in the conference standings and are one of four teams in the Iowa Conference who have an overall winning record. Leading the Storm offensive attack is sophomore Tabitha Blaser, who is currently ranked second in the conference in average kills per set (3.22; 222 total) in just 69 sets played. Senior Kim Rogers is ranked second in the IIAC in digs per set, averaging 4.61 for a total of 318 in 69 sets. Sophomore Katie Kieffer ranks in assists per set, averaging 9.51 for a total of 656 in 69 sets as well.

As the Storm continues to grind and battle on both sides of the net, the team will face competitive matchups as they head into this weekend’s worth of play.

Wheaton College (20-8, 1-2 CCIW) head into the Pumpkin Bash tournament off a 3-1 win over the University of Wisconsin-River Falls on Oct. 19. Maddie McGinnis leads the Thunder and its attacks, recording 309 kills on the season so far. Another threat comes from the striking of Shelby Knowles, who ranks second on the team in kills with 272. Lauren Wilhite leads the team in assists (541) and Kelli Manning in digs (378). Emily Buyse leads the Thunder in blocks with 75, recording 15 on her own and 60 assisted.

Carthage College (16-10, 2-2, CCIW) heads into the tournament after defeating North Park University 3-1 on Oct. 19. Emily Heuermann and her 316 kills lead the Lady Reds, averaging about 3.10 per set. Karen Chin leads the team in assists (963) while Hanna Cahoon leads the team in digs (517). Rachel Mickey and Bria Halley are the 1-2 punch in regards to blocking, as the duo recorded 65 and 64 blocks so far this season, respectively.

William Penn University (12-23, 0-3 MCC) will have their second go-around against the Storm, as the two teams first met on Oct 7 with Simpson winning 3-0. The Statesmen recently fell victim of the loss against Loras on Oct. 19, being shutout by the Duhawks 3-0. In fact, William Penn is on an eight-game losing streak. Leading the Statesmen offense is Kylie Giger and Kristal Campos. Giger owns the team-high in kills with 266 while Campos ranks second with 234. Contributing the majority of Giger and Campos’ kills is Dayna Sammons, who leads the team with her 650 assists. Danielle Breeher leads the team in digs (504) while Giger also is first on the team in blocks with 85 (27 solo, 58 assisted).

Augustana College (14-9, 2-2 CCIW) heads into its tournament after defeating North Central 3-1 on Oct. 15. Martha Murray and her 208 kills lead the Vikings, while Jordan Hampel and her 415 assists lead the team as well. Kylie Siebert has a team-high 419 digs on the year so far while Jaquel Kibir-Evans leads the team with her 41 blocks (four solo, 37 assisted).

Simpson will open the tournament Oct. 25 against Wheaton at 4 p.m., followed by Carthage at 8 p.m. Then, on Oct. 26, the Storm will go head-to-head with the Statesmen of William Penn at 10 a.m., followed by the Vikings of Augustana College at 12 p.m.

Simpson continues conference play on Oct. 30, as the team faces the University of Dubuque at home at 7:30 p.m.