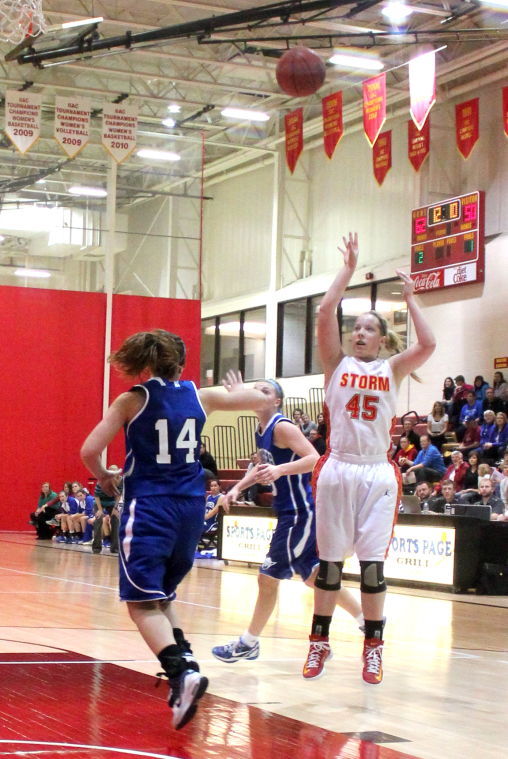 Last year, the Simpson women’s basketball team starting lineup consisted of four seniors and a freshman – winning a conference championship and playing in the Sweet 16 of the Division III National Basketball Tournament to cap of a 27-3 season.

Coming off the bench were five key freshmen. Now, those freshmen turned sophomores are now the leaders of the women’s basketball program heading into the 2013-14 season.

What perfect motto for the team to go by than “Together We Are Better” as the young team progresses towards the rich tradition of Simpson women’s basketball.

Sophomore guard Whitney Van Wyk returns to the court after leading last year’s freshmen in minutes (15.8). The guard averaged 4.5, 1.6 rebounds and 1.0 assists per game. She shot almost 31 percent from behind the arc and made 77 percent of her shots from the free-throw line.

Sophomore point guard Maddie Bosworth will likely fill in the shoes of her position elder from last year’s squad, Kelsie Reeves. Bosworth, who came off the bench replacing Reeves, averaged 2.0 points per game, shot almost 30 percent from the field and made 81.2 percent of her free-throws.

Sophomore forward Brooke Panzer is the only returning starter for the Storm. The 5-foot-10 native of Lincoln, Nebraska started and played in all 30 of Simpson’s games, averaging 6.2 points and 4.9 rebounds per game. She shot 42 percent from the field and almost 74 percent from the charity stripe.

The lone senior, Morgan Terpstra, played in 29 games last season and started one. The forward averaged 3.5 points and 13.0 minutes per game.

Mauro said that she, as well as the other sophomores on the team, are confident in being the leaders of this season’s team.

“We knew from the beginning that coach (Brian Niemuth) would need us sophomores to step up and be leaders, so we are ready,” Mauro said. “Most of us got experience last year by not only playing, but by having seniors who set a great example of leadership both on and off the court for us as freshmen.”

Mauro added that the sophomores all bring different types of leadership to the team, which she believes is important by making the Storm a strong group.

With official practices beginning last week for the Storm, Mauro explained that practices have been going really well as of late, saying that the biggest thing the squad has been focusing on is playing hard at all times on the hardwood.

“We are an up-tempo team and like to push the ball up the floor, so we are trying to get the newcomers used to that style of play,” Mauro said. “We have also been working on skills that each individual brings to the team, whether that be as guards, shooters or post players – putting those skills together.”

She added that her teammates have a lot of talent and think every one of them bring a different aspect to the team that will make them successful.

“We all want to follow the tradition the past teams have had and just be successful,” Mauro said. “We are determined to be just as good of a team and will keep working hard towards our goals and showing people that even though we may be young, we have enough talent, determination and leadership to make this team successful.”

The Storm begin their season on the road at AIB on Nov. 18. Tipoff is scheduled to begin at 6 p.m.