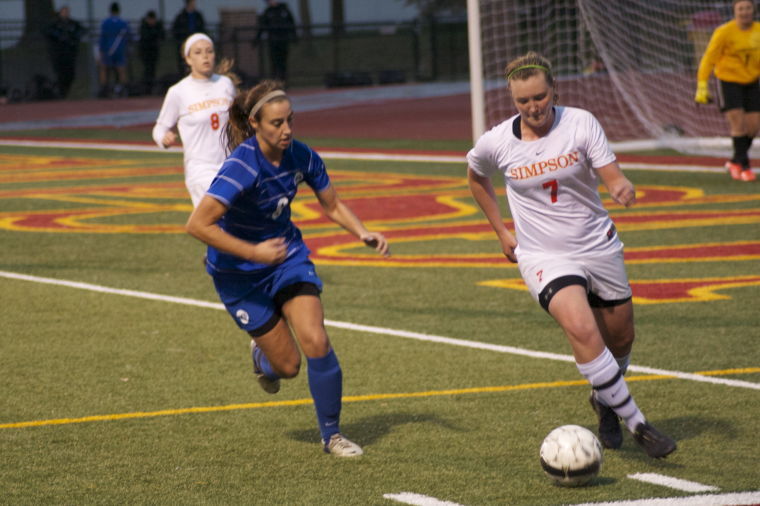 The Simpson women’s soccer team was defeated 1-0 by the University of Dubuque on Oct. 29 at Bill Buxton Stadium.

The lone Spartans’ goal was booted to the back of the net by Alexandra Watkins – her 14th of the season – in the 32nd minute of the contest.  Simpson was only able to muster six shots on the night, with two being on goal.

Head coach Ryan Sander said that this was healthiest his team has been as well as having the same backline in three games.

“Obviously going through a ton of injuries and things like that are always hard, but we are starting to pull things together,” Sander said. “We were outshout, but I felt that we had momentum – we just couldn’t finish in the final third. We’ve got another game to look forward to.”

Simpson (4-15-1, 2-4-1 IIAC) earned themselves the No. 6 seed in the IIAC Tournament, with play beginning on Saturday, Nov. 2.  Despite the Storm’s struggles throughout the season and being plagued by injuries, Sander said you end up having smaller goals other than just winning games.

“Goals within the game,” Sander said. “We’ve been decimated by injury all year, so it’s just one of those things when we get to the next game, maybe we can get somebody back.”

He added the biggest problem the Storm have faced all season long is killing themselves; putting too much pressure on individual and team play – something the team needs to better in order to last longer at the conference tournament.

“We’ve got to limit our mistakes and take advantage of those opportunities that we do have,” Sander said.

Simpson will battle No. 1 seed Loras (15-3-1, 7-0 IIAC) on Saturday, Nov. 2 in Dubuque. Game time is to be determined. Follow @SimpAthletics on Twitter for tweet-by-tweet updates of the game.