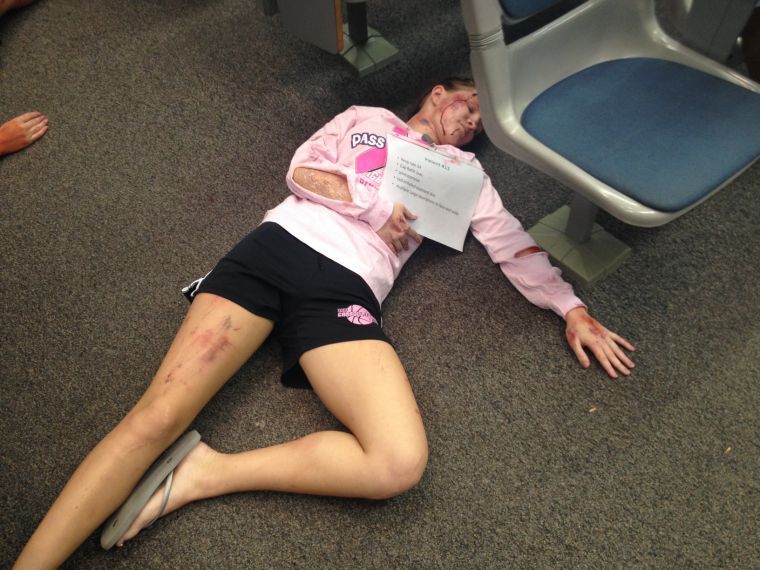 The goal was to learn how appropriate agencies should respond if a crisis occurred on campus.

For the training, a fake explosion was created inside Carver Science Center and resulted in a shutdown of the building.

Some Simpson community members within the science department helped as victims who were affected by the chemicals from the explosion.

Student volunteers participated as injured patients, with some acting as unresponsive victims of the disaster. A makeup artist covered the student volunteers with theatrical scars and blood to create a true scene of a disaster.

Some students said the main takeaway from the disaster drill was seeing how helpful the different law enforcement and safety agencies are in Indianola. Furthermore, they said it taught them how to act in a real disaster situation.

KCCI NewsChannel 8 and the Indianola Record-Herald also helped in the drill. Both helped identify appropriate questions reporters should ask if there was an actual disaster. Public Information Officers (PIOs) answer to reporters’ questions in press conferences and one was available at the training to find appropriate responses.

Simpson students were notified of the drill through email, telephone and text messages. Student Development and the Office of Marketing and Public Relations initiated alerts through the Simpson Alerts for Emergencies (SAFE) system before, during and after the event. The Simpson community was able to activate SAFE through StormFront.

After the drill, participating agencies met in Jordan Lecture Hall to discuss what succeeded and what could be improved in a potential mass-casualty incident.