Weight room split in half 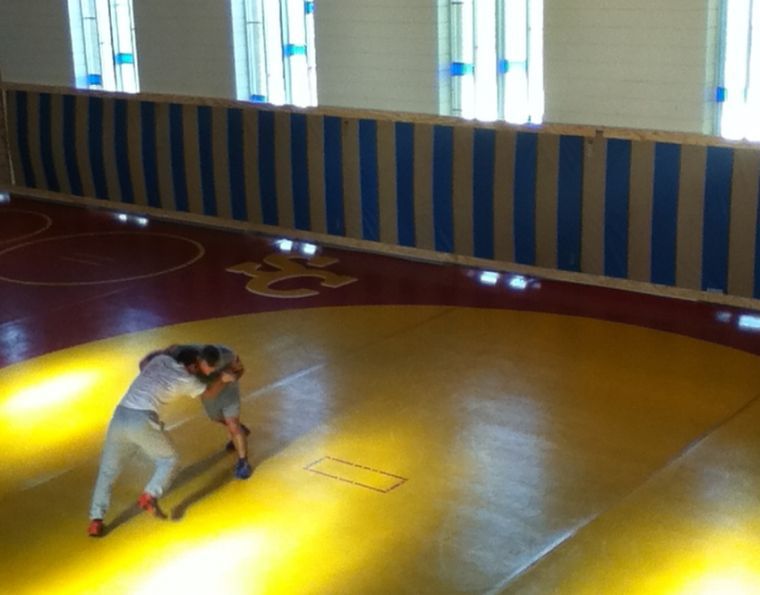 The renovation of Cowles has caused the weight room to be split. Half of the weight room is in the basement of the Catholic Church, which Simpson College has purchased, while the other half is inside the Campus Services storage area that has been turned into a fitness center.

“It’s a temporary situation and it’s not ideal, but I think we’re making it work for this first semester,” said athletic director Brian Niemuth. “For the fitness center, we have been asked to put more free weights, a power rack and dumb bells in there, so we did that. We try to accommodate everybody.”

Niemuth said the athletic department is doing the best they can with the split weight room.

“All the heavy strength equipment was transferred to the Catholic Church,” said Niemuth. “It will split the athletes during workouts and should never be overcrowded.”

Students should be aware that the weight room in the Catholic Church is not an open facility.

“With the Catholic Church being off campus and not supervised, our athletes can only get in there with their strength coach or regular coach,” said Niemuth.

For safety and budget reasons, there is one fitness center strength coach out at the Catholic Church. This will allow the athletes to run through their supervised sessions with the strength staff. The strength coach organizes the scheduling among teams who work out at the church.

“Our coach does a pretty good job of scheduling the lifts, so we haven’t had very many conflicts with the other sports team,” said senior wrestler Jeff Sand.

Practicing off campus at the Catholic Church since mid-summer, Sand and the rest of the Simpson College Wrestling team will never forget the daily workouts and practices inside the church.

The stained glass windows surround the two walls facing east and west, and wrestling mats surround the floors. The Simpson College Wrestling team has the Catholic Church as their temporary sanctuary for the fall.

“It’s different,” said senior Derek Entz. “It’s better than I expected it to be. It’s definitely going to take some time getting used to it.”

With only one padded wall, Entz explained the importance of mat awareness.

“We only have one padded wall, which could possibly be a bad thing because there’s a lot of glass there,” said Entz. “The biggest thing this year is the freshman learning mat awareness. They are going to have to learn it a little quicker by working in this environment.”

The church is a ten minute run off campus according to Entz who sees it as a nice warm up.

The new room for the wrestling team and the weight room is targeted for Jan. 3.

“It doesn’t have quite the wrestling atmosphere,” said Sand. “We’re ready for the new room.”