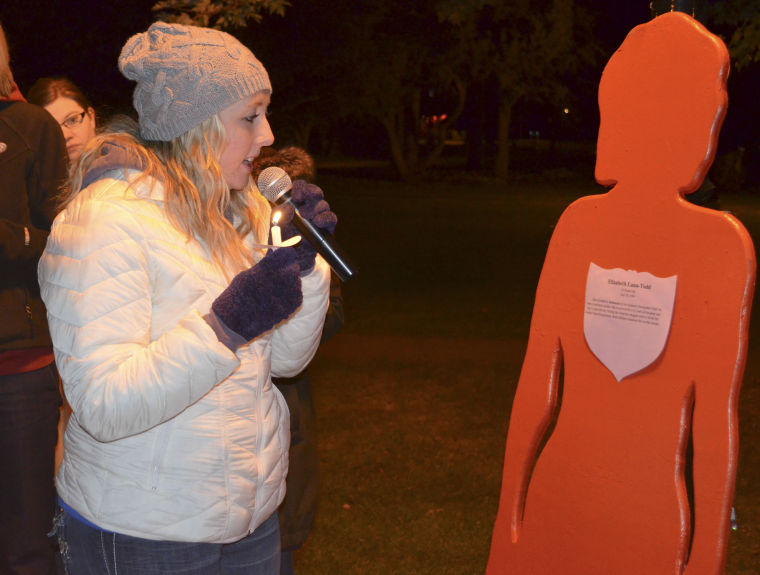 The event took place in Buxton Park on Oct. 24. The first half of the night consisted of students reading poems and a song playing in between each reading.

The poems and music transitioned from themes of hopelessness and despair to strength and courage. They started out playing “The Little Girl” by John Michael Montgomery to Gloria Gaynor’s “I Will Survive.”

Authors like Maya Angelou wrote many of the poems, but students also wrote some. Freshman Kylee Hereid wrote her poem titled “The Girl in Glass.”

The Warren County Coalition Against Domestic Violence is a group of professionals and citizens who want to prevent domestic violence and promote awareness of it.

“One in four women will experience domestic violence in their lifetime,” said Emmalee Bowlin, general assistant director and vice chair of the coalition.

In the second half, participants took a candle and walked around to red figures of adults and children in Buxton Park. The Silent Witness display is a traveling memorial honoring Iowan women who were killed in acts of domestic violence.  Each figure has the story of their death attached to it.

One of the figures represented a case from Indianola.

“A husband killed his wife, and then killed himself right in front of their two children,” said Engelbart.

The coalition’s posters said one in 33 men has experienced an attempted or completed rape. An estimated 1.3 million women are victims of physical assault by an intimate partner each year and boys who witness domestic violence are twice as likely to abuse their own partners and children when they become adults.

“It’s an overwhelming majority of victims who are women, but men are victims as well,” Bowlin said.

Engelbart urges people to take action if they know domestic violence is happening to someone.

“If you see people that are affected by domestic violence, please ask them if they need to reach out,” Engelbart said. “You reach out to them. Try to help them if you see something. Try to get them some services.”

Engelbart has worked in this field for about ten years. She said she continues because she understands victims and she likes to help them.

“I just really want to help victims,” she said. “And I’ve worked with victims for a long time and victims are hard to work with because sometimes they’re not cooperative, and I think personally, I think I help make them sometimes turn that corner. I feel that.”

If anyone is interested in helping with the Warren County Coalition Against Domestic Violence, they can contact Ruth Engelbart at [email protected] or 515-961-1149.