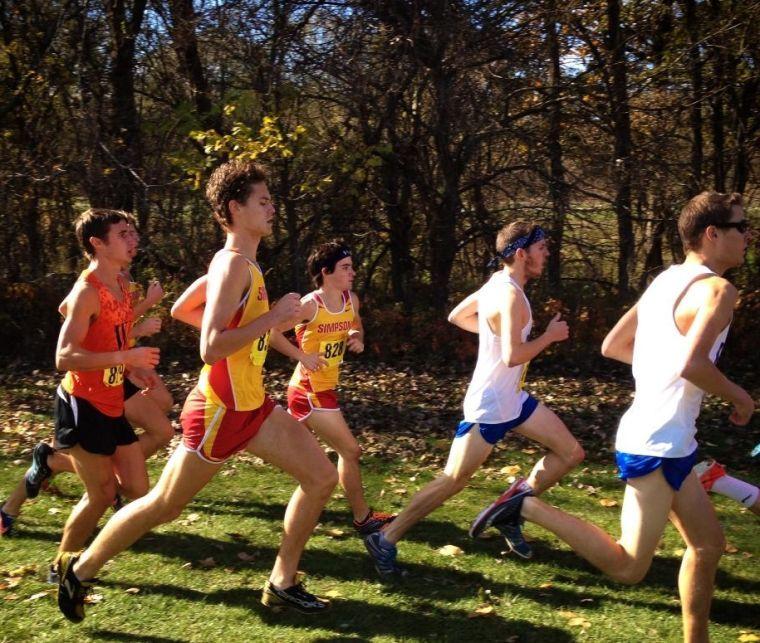 Running the hills in Pella, Iowa, both the Simpson men’s and women’s cross country teams ran for a sixth place finish in the eight-team field at the Iowa Conference Championship meet on Nov. 2.

For the women’s meet in the 6K run, No.3, nationally ranked Wartburg paced themselves for first, running away with the team title after collecting 30 team points on the day. Following the Knights in second was Loras with 43 team points and Luther in third with 59 team points.

Site-host Central finished fourth (104), in fifth was Coe (173), Simpson in sixth (179) and Dubuque in seventh (180). Buena Vista would be the eighth and final team, but did not register an overall team score.

Leading the Storm was senior Lindsey Borgomainerio and her 32nd place finish. The senior ran the course in 25:03. Freshman Briana McCloskey wasn’t far behind, as she placed 34th at a time of 25:11. Junior RaeLea Jones was one spot behind, finishing 35th and crossing the finish line at a mark of 25:13.

For the men’s meet in the 8K run, Central won their first team title in 49 years, after collecting 31 team points. Following the Dutch in second was Loras with 59 team points and Luther in third with 64 team points.

Out in front for the Storm was freshman Ethan Pellegrino and his 34th place finish. He ran the trails with a time of 27:10.  The next two Simpson runners to finish were a pair of seniors – Bryce Phillips and Max Nguyen. Phillips completed the run in 28:07 for 59th. Nguyen crossed the finish line at a time of 28:18 – good for 66th.

Simpson will travel to Northfield, Minn. and take the trails at the NCAA Regional Championship meet on Nov. 16. Runners will take their marks at 11 a.m.