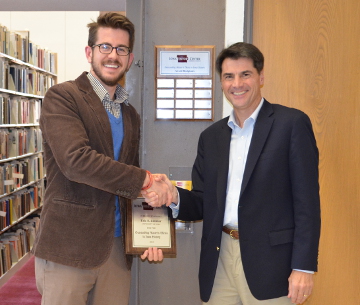 The Iowa History Center at Simpson College has named Eric Zimmer the 2013 recipient of its prize for the outstanding master’s thesis in Iowa history.

His work happened to be a capstone project in order to receive his Master of Arts Degree. Zimmer’s advisor at the University of Iowa, Dr. Jacki Thompson, nominated Zimmer’s submission to the Iowa History Center.

Zimmer received a $1,000 cash prize and an award plaque for his work. According to the Iowa History Center’s website, they seek nominations annually for recognition of the outstanding master’s thesis in a field of Iowa History.

Professor of history and director of the Iowa History Center Bill Friedricks believes Zimmer created a strong and polished work in his thesis.

“We are happy to recognize Eric’s work,” Friedricks said in a press release to Simpson College. “It has the polish of a more advanced scholar, and we expect Eric to make a significant contribution to not only Iowa history but also to the history of tribal-state relations.”

According to Zimmer, he spent a full year getting to know tribal members, especially the Meskwaki director of historical preservation, Johnathon Buffalo. He also learned everything he could about the tribe through secondary sources, and then conducted research at the Meskwaki tribal museum, the State Historical Society of Iowa offices in Iowa City and at the National Archives and Records Administration Center in Chicago.

Zimmer double majored in history and political science at Black Hills State University in South Dakota. He received his undergrad in 2010.

Zimmer plans to publish his research someday as he continues to expand on this project. He plans to focus more carefully on issues for a book-length research project required to achieve his PhD. Zimmer is hoping this research project will serve as a rough draft for his book manuscript. He has been in touch with representatives at the University of Nebraska press but conversations have been kept at a minimum for the time being.

As opinionated by Friedricks, Iowa history was in trouble in 2006. It was rarely taught in schools, colleges, or universities. Funding was slashed and the major publisher of Iowa history, Iowa State University Press, stopped publishing Iowa history. The Iowa History Center was created in hopes to address these shortcomings.

“Our mission is to advance the understanding and appreciation of Iowa history among our state’s students, scholars and the general public,” Friedricks said. “We work to introduce Simpson students to Iowa history, encourage it in the state’s schools and communities and foster the research and writing of Iowa history.”

“The general public remains interested in history, but I think that interest is shifting to subjects and mediums that we don’t quite understand yet,” Zimmer said. “As long as people like Bill [Friedricks] and I exist who are passionate about history, care about the craft of researching and writing and are willing to put in the work, history will always thrive.”