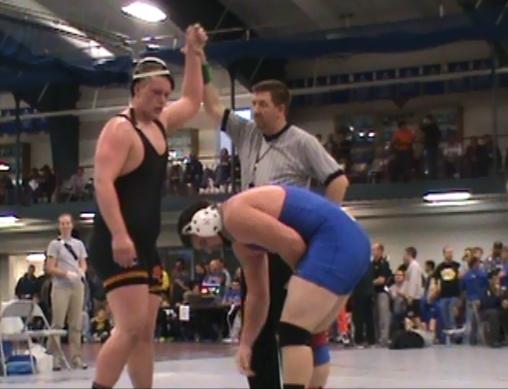 Freshmen led the Simpson wrestling team in the season-opening this past weekend.

“We surprised a lot of folks who were expecting the same SC wrestling team from last year,” head coach Nate Hansen said. “The only people who weren’t surprised were us. It was a measuring stick for the season and now we know the areas we need to focus on technically as a team.”

“My first match didn’t go as well as I thought it was going to go,” Vlieger said. “I ended up losing my first match, but I just gotta keep what I learn from the coaches and I came back and ended up winning my next three matches.”

Shane Swank also added a fourth place finish in the Freshmen Division with a 4-2 record at 165 pounds. He won his first three matches of the day before losing in the championship quarterfinals.

“We faced some of the best wrestlers in the country across all divisions today,” Hansen said. “We need to respond next week and stay on the rise with consistency. I’m pleased with the overall effort and fight; not satisfied with the results.”

The first tournament was a good experience for the wrestling team.

“Overall the team is looking good and I think we got our feet wet with a tough tournament for the start of the year and there’s only one place for us to go and that’s up,” senior Jeff Sand said.

Freshman Ryan Joint was one of three Storm wrestlers with a winning record (3-2) at 149 pounds in the Gold Division. Other standings include: Jeff Sand (2-2), Greg Harlow (2-2) and Taylor Witzel (2-2).

“It’s a smaller tournament than the Luther Open, but there is still a lot of high competition,” Hansen said. “What I really want to see is our first championship for the year and go into Thanksgiving break on a positive note.”