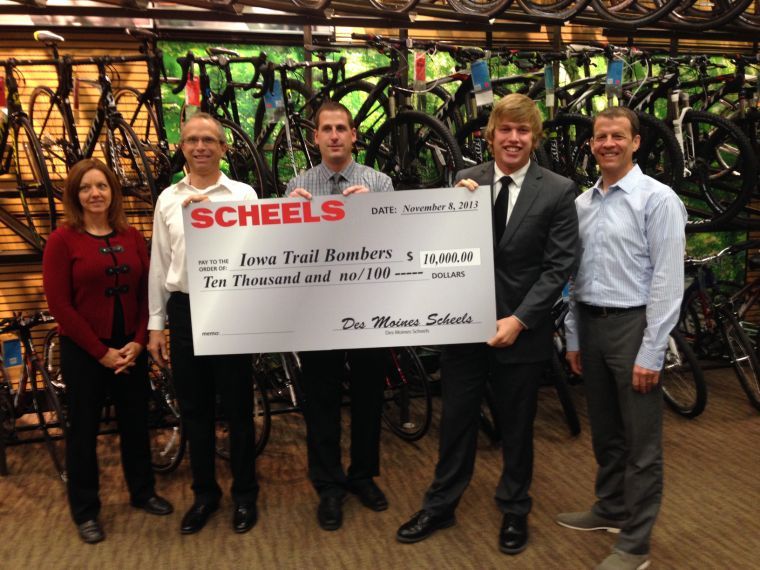 Simpson College junior Stephen Schmidt is the executive director and founder of a nonprofit company called the Iowa Trail Bombers.

The Scheels operating out of West Des Moines recently signed on as the title sponsor for the company.

“We’ve been working with Scheels a lot for the past couple months and they were generous enough to sign on as our title sponsor. It is a donation from them to be the title sponsor for us which is the highest sponsorship we have. So they decided to sign on and present us with a $10,000 check,” said Schmidt.

Jeannie Irvine-Blazek, event coordinator for the West Des Moines Scheels, was responsible for the work done with the Iowa Trail Bombers. She was unable to be contacted for input at this time.

According to Schmidt, the organization became recognized under the state as a non-profit company in May of 2013.

“The idea has been forming and things have been in process for almost a year and a half now,” said Schmidt.

Schmidt will be putting the money donated by Scheels to fund the “master trail plan.” It is being conducted by the International Mountain Biking Associations contractor Trail Solutions.

“They came in and actually mapped all of the land that we are building our mountain biking trails on. They walk every square foot of the land with GPSs and they’re putting together a trail plan for us,” said Schmidt.

Having this mapped out will kick off the fundraisers for the company in the early spring of 2014 according to Schmidt.

In a nonprofit organization, they try not to ask for money; rather they try to show them what their possible investment could do for them. A company such as this tries to show how it can help the community and give back.

The Iowa Trail Bombers have been working with Scheels over the last couple of months. Some of the board members for the organization have worked with Scheels even longer than that and have built a strong relationship. By donating such a large amount of money to this company, Scheels has shown they support the Iowa Trail Bombers and believe they are doing something for the community.

The name Trail Bombers was taken from a term in 1960s and 70s referring to beach cruiser bikes decked out with big tires called springer forks and big brakes and called them bombers. They took these bikes to the mountain bike trails. Schmidt took this name and used it for his company.

Schmidt hopes for support from his fellow Simpson students in his endeavors and offers a way to show support by liking the company page on facebook which can be found under the name Iowa Trail Bombers. The company can also be found at the website iowatrailbombers.com where information can be found and Schmidt also hopes to have merchandise on the site soon as well.