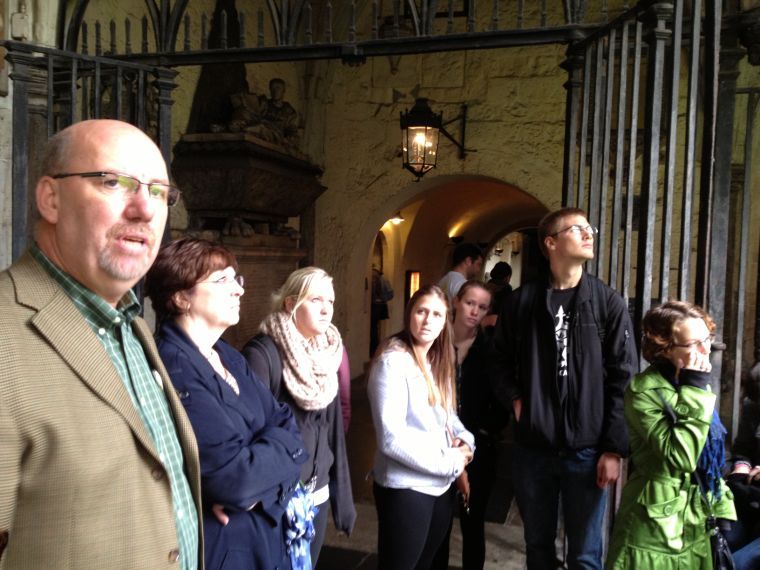 Sixteen students and one professor traveled to London for the fall semester and discovered what America’s motherland has to offer.

The students attended classes at the University of Roehampton and took two more classes with Simpson Professor Brian Steffen, who also stayed in London.

Sophomore Tori Halloran chose Simpson because of its emphasis on study abroad opportunities.

“I think that it is such an important aspect of college that a lot of people miss out on,” said Halloran. “I’ve always loved England. I’ve always been fascinated by their history and their culture, especially in their relation to the United States.”

Before traveling abroad, the students took a London prep course led by Steffen. The class covered cultural history, government procedures, what to wear and pack, and what to expect of the city. Senior Rick Blake said this helped the students avoid culture shock.

Sophomore Kaye Taylor immediately felt at home on the University of Roehampton campus.

“The campus reminded me of Simpson, like how close knit everyone was and how beautiful it was,” said Taylor. “I really liked how our campus was close to everything. Once we got the hang of everything, it felt like we just fit right in.”

The drinking culture came as a shock to many of the students on the trip Blake said it was, “woven into the fabric of their culture.” Taylor discovered how it affected social activities and bonds.

“A friend of mine said it seemed like our friendships were built more on the foundation of friendship, and theirs was who you went out and got trashed with,” said Taylor.

“I didn’t drink in high school, so it was interesting to go in and meet these people who had been drinking since they were 14,” Halloran said. “I also loved the pubs. I loved seeing the little old men or the people in business suits after work going to get a pint.”

When the students were not discovering the local pubs, they attended classes.

“I was in a couple 300-level English classes. You could have found them here, it seemed like. They were different, but the differences were pretty subtle,” Blake said.

Halloran has not declared a major and found this was an unknown term to her fellow U.K. students. “For them, going to uni, they’ve already decided what they’re doing, and they are there to focus on one area,” she said. “They don’t have major and minors. They’re just there to study something.”

Public transportation throughout London proved to be a struggle at the beginning of the semester.

“The thing that I’m most proud of that I did was that i got an understanding of London. I am from a small town where we don’t have public transportation, so it was quite an accomplishment. In a city of that size, it’s a liberating thing to know that you can get yourself somewhere,” said Halloran.

“Being able to go out on my own and not be scared was my biggest takeaway. I became much more independent, and I think that’s carried through to here,” Taylor said.

Budgeting and London lingo also caused confusion for the students. “You’ll go to eat and order a hamburger for nine pounds and then figure out that was sixteen dollars,” Taylor said.

“Pants’ does not mean pants. It means ladies’ underwear, and that is an awkward conversation to have,” said Halloran.

The students found time to travel, see sporting events and hunt down celebrities that frequent London. “I met the cast of ‘The Hunger Games’. I met One Direction and saw Tom Hanks and the cast of ‘Thor’. That just doesn’t happen here, so I thought that was so cool,” Taylor said.

Blake saw the Liverpool Football Club. “I went for a game, and it was crazy,” he said.

The students are back at Simpson for the spring semester. Just as they had to adjust to London, they have to re-immerse themselves into their lives in the states.

“It was a little bit like a vacation, but I have to come back to reality and life has to keep going on,” Halloran said. “Not that I don’t love the Nebraska or Iowa area, but it’s just not the same. If I had the genie and the wish, I would definitely live there again.”

Their experiences were not left in London, but reached a personal level for each student.

“Actually throwing yourself into the experience is a lesson that can only be learned through that. It teaches you what you can handle and lets you grow as a person in ways that you didn’t know were possible,” Halloran said.

Blake gained “independence, confidence, and being reminded that you have room to grow. Not settling, pushing the bound of your comfort zone and getting out and trying new things and meeting new people.”

“Our group that studied abroad became really close. It never dawned on me that I would make really god friends with the people in our group,” Taylor said.

“No matter what country you go to, no matter their background, everyone is a person. Everyone has their struggles. Everyone has qualities you like and qualities you don’t like. You go and expect them to be completely different, but they’re not,” Halloran said. “Everyone has something to teach you, and it’s important to take the time to notice that.”