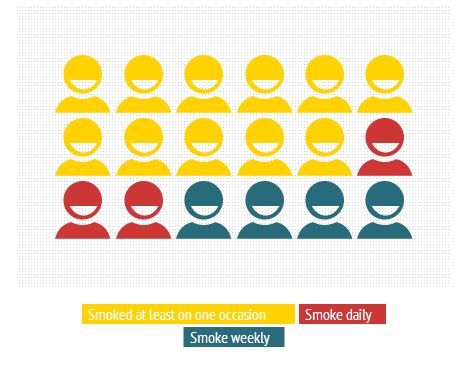 by Rachel Peterson and Tessa Lengeling

In a recent poll taken by The Simpsonian, nearly 60 percent of students said they believed marijuana should be legalized in Iowa.

The poll came after President Obama’s recent comments to the New Yorker.

“I view it as a bad habit and a vice, not very different from the cigarettes I smoked as a young person up through a big chunk of my adult life,” President Obama told reporter David Remnick. “I don’t think it is more dangerous than alcohol.”

Sen. Bolkcom and Rep. Bruce Hunter want to present a bill later this session that would exempt people suffering from cancer, HIV/AIDS, ALS, severe pain and other ailments from arrest for using marijuana under their physicians’ recommendations. They would be able to grow it themselves or get it from a dispensary.

Liz Rice, junior, believes marijuana should not be legalized.

“It’s a gateway drug. What can be legalized next? It gives people who don’t do it incentive to do it,” she said. “They will get bored and move on to something more severe.”

“Saying weed is okay leads to saying other drugs could be okay. It doesn’t set the right moral standard,” she said.

When asked if they had ever smoked marijuana, 48 percent of respondents said they had at least one occasion. Out of the people who had smoked, nearly 11 percent did it daily and 15 percent on a weekly basis.

“People of the younger generation are more accepting of it because they’ve been introduced to it at a younger age than other generations,” Rice said. “It’s become common and the bad image of it has lessened as more states legalize it.”

“Our generation has grown up with more of a prevalence and exposure to marijuana. Generations before us always equated it with harder drugs and put it in the same category, but it’s just part of being a rebellious teenager,” Evens said.

Waddell said if Iowa would legalize marijuana, it should ave the same restrictions as alcohol and tax revenue from sales should go to fund education.

“You can grow marijuana yourself and it’s hard to control who has it and how much they have,” she said.