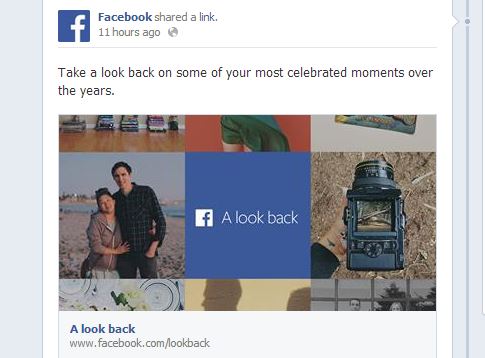 “I joined, probably seventh grade, in middle school, when you lie about your age. It was the cool thing to do, join your friends, write on their walls. It was a popular thing,” freshman Cournty Caston said.

“Everyone had Facebook. You had to actually have an invite back then, so it was very exclusive,” senior Ryan Rohlf said. Rohlf joined the network before his freshman year in high school.

Starting Tuesday, mobile and web users could take advantage of the new tool ‘Look Back’, which lets users watch a brief personalized video of their digital life. The movie shares users’ most engaging posts and photos starting from the time they joined the service.

Facebook recently came to attention after a Princeton University study predicted the site would lose 80 percent of its users by 2015 and would ‘die like a virus’, as reported by the Daily Mail Online. Students say while the site might be in decline, a death sentence may be premature.

“I don’t think next year, I think maybe in a few more years it’ll disintegrate, like Myspace did. Myspace is nothing now,” Caston said.

Junior Andrew Kline doesn’t see himself staying on Facebook for much longer.

“I really honestly don’t use it that much anymore. It’s just kind of there and I go through my newsfeed every now and then to see what’s happening,” Rohlf said.

While most students cite keeping in touch with friends and family as a reason to stay plugged in Rohlf uses it share articles and news, but says he’s cut down on that as well.

“It’s to try to get people talking, but nobody responds so I really don’t do it that much,” Rohlf said.

Regardless of students’ opinions, Zuckerberg’s public statement — released through Facebook — outlined some of his plans for the social network’s next decade, which include helping to connect the two-thirds of the world’s population currently without access to the internet.

“The first team years were about bootstrapping this network. Now we have the resources to help people across the world solve even bigger and more important problems,” Zuckerberg said.