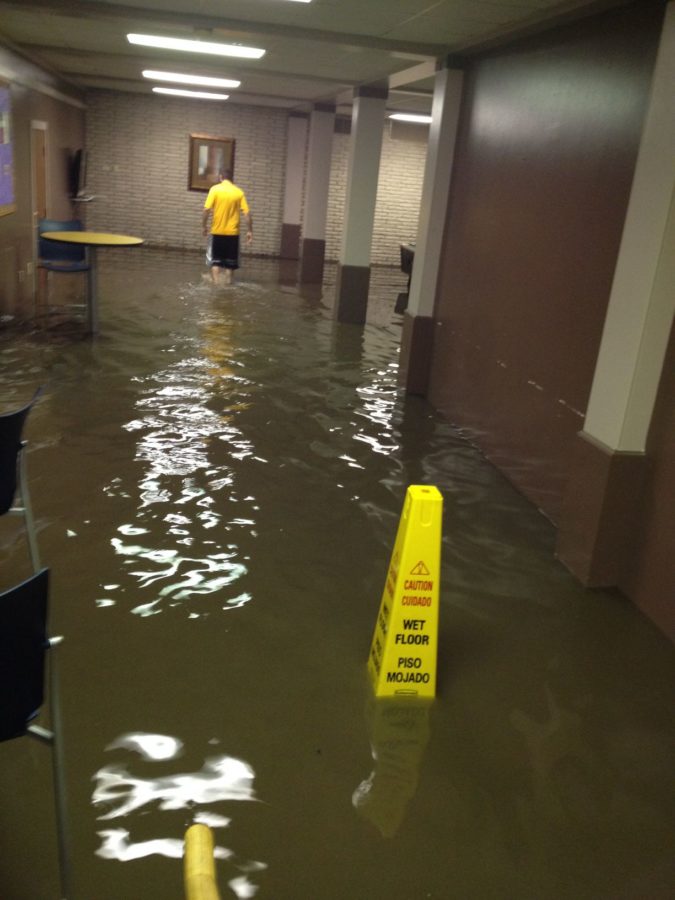 “It’s just too much water for it,” Behaunek said as he walked through the basement. “I’m just happy no student rooms were affected at all.”

The water appeared to have seeped through the courtyard foundation and windows into the basement rooms. Campus Services began cleanup this morning and expect to have the basement cleared by the end of the day, Behaunek said, adding that a steam cleaning crew would be in later this afternoon to aid clean-up and install dehumidifiers.

Storms are moving out of south-central Iowa, although Warren County is still in a flood warning, reported The Des Moines Register this morning. The forecast is expected to stay dry and cool.

Tuesday: Freshmen living in the Kresge residence hall scrambled to move some of their building furniture out of the way as water poured in from the building’s foundation, flooding a common room, computer lab, and kitchen Tuesday night.

Junior Nick Hermon reported flooding in Kresge’s basement to Campus Services a few minutes before 7:00 PM. By 7:06 PM, nearly 7 ½ inches of water covered the living room, computer lab and kitchen, rising over the first step towards the residence hall rooms.

“We were just chilling in the basement when we saw the water coming out of the pillar,” Hermon said.

Water apparently flooded the Kresge basement through two center pillars in the living area and a wall inside the computer room. Students moved couches out of the way, but the pool table, wall-hanging television set, laundry, and kitchen facilities stayed in standing water. Campus Services began draining the water at about 7:13 PM.

The basement was cleared out of water by 9:40 PM, according to student life coordinator Ryan Stewart, senior.

“We brought in a [sump] pump and got the water out. Left with a mess,” Stewart said. “I would guess we will have flooding again through the night.”

See photos and tweets from The Simpsonian’s Storify account here.