Braley and Ernst face off at Simpson debate 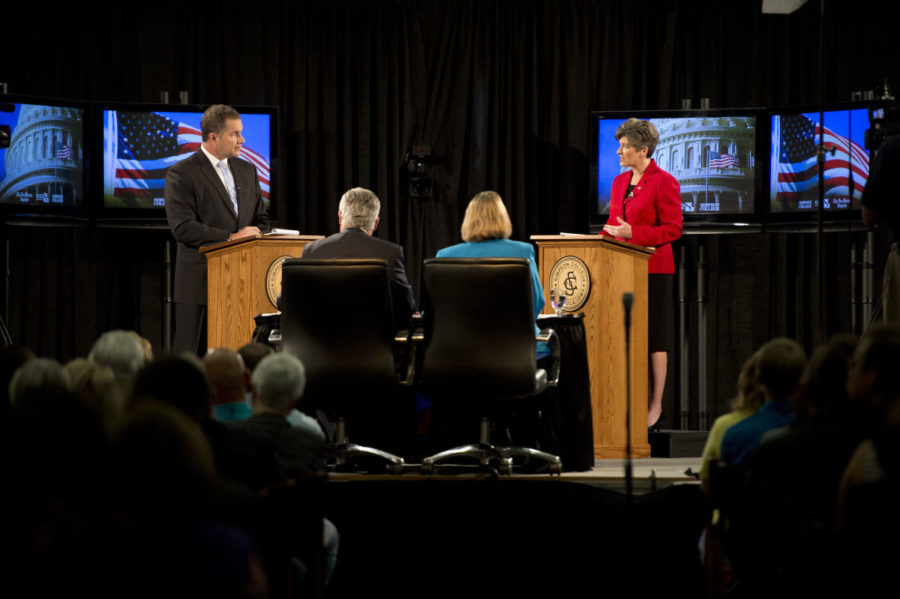 The tension in the room was nail biting as the two U.S. Senate candidates agreed to disagree on many policy stances. The first debate was full of new plans for Congress, non-answers on policy and personal attacks that left viewers curious about the remaining 30 days until Nov. 4.

Supporter rallies created a strong political atmosphere early on as each campaign set up in Buxton Park. Signs and shirts were not allowed inside the Kent Campus Center, meaning supporters represented their candidate everywhere else on campus with barn signs and t-shirts. The campaigns were segregated, reflecting on the campaign culture of this election. Chants were yelled as candidates arrived and Senator Tom Harkin came to watch his future successor.

The divide between the two campaigns spread into the debate room as well. The audience devoted their claps and cheers for their preferred candidate as they walked on stage. Each candidate looked nervous writing notes and preparing themselves for what was a heated debate.

The candidates were professional, until personal attacks from media ads made each candidate uptight and ready for a debate fight. “You are running against me Congressman, not these other groups. Let’s keep it at that,” Ernst said, when discussing the Koch Brothers’ funding for her campaign.

To retaliate, Ernst said Braley did not have Iowa values as he was willing to sue his neighbor for chickens coming onto his yard. With 10 seconds to respond, Braley said, “That is not true. Simply not true.”

The tension was not only over personal attacks, but policy stances as well. Veterans affairs, taxes, health care and the Department of Education were topics that created especially defensive responses.

Simpson junior, Jacob McLain, was able to ask Ernst a question about her stance on the Department of Education. It is rumoured that Ernst, if elected, would propose to eliminate the department.

“I wanted to ask the question about education because it was on a college campus and it is important to ask questions relevant to students,” McLain said. “I know 26 percent of students receive Pell Grants at Simpson and I receive federal loans so I would like to keep those coming.”

Students were given the opportunity to watch an important public debate and decide their positions. “In order to have a healthy democracy it is dependent on voters,” McLain said. “It’s important for students to know what is going on because they are the ones voting and need to be informed on those decisions.”

A second student was able to ask a question to Rep. Braley. Jacy Gomez, junior, asked about how he would handle terror threats and how he thinks President Obama is doing to address the Middle East.

“I was overall pleased with Braley’s answer,” Gomez said. “He did a nice job of critiquing the lack of global involvement in President Obama’s current strategy.”

Gomez learned more about the candidates and felt students would be more involved in the political discussion after the debate because it was discussed over social media.

“College students get wrapped up in their own world and fail to acknowledge there is a world outside of campus,” Gomez said. “It’s important to get engaged now to learn about the issues that are going to affect students when we inevitably leave campus.”

As the debate came to a close the immediate question was, who won? Senator Tom Harkin said in an interview after the debate, “In my 40 years of doing debates I have never been to one where someone wins or loses. Someone may make a gaffe, but that does not mean a loss,” Harkin said.

Harkin will be retiring after over 40 years of political involvement, making this election one to watch. Harkin knows exactly what each candidate was going through that day. “I wish I could have been on that stage, but I’m sure that will fade with time. I love debates and having done so many I know they are thinking, I should have said that or thought of this,” Harkin said.

Harkin felt Braley did well at the debate, but made sure to have multiple notecards of suggestions for the second debate.

“Both candidates did well overall, but Braley showed what I call the three c’s; caring for others, compassion for the less fortunate and concern for the kids,” Harkin said.

There are about 30 days left until election day. Still time for voters to make final decisions and for candidates to make their last attempts at swaying independents. Phone call after phone call, door after door, both campaigns are going to fight their way to the front. The first debate showed viewers how different the candidates are from each other. The election is up for grabs at this point.