A winning experience: Simpson senior comes away with new lessons after pageant 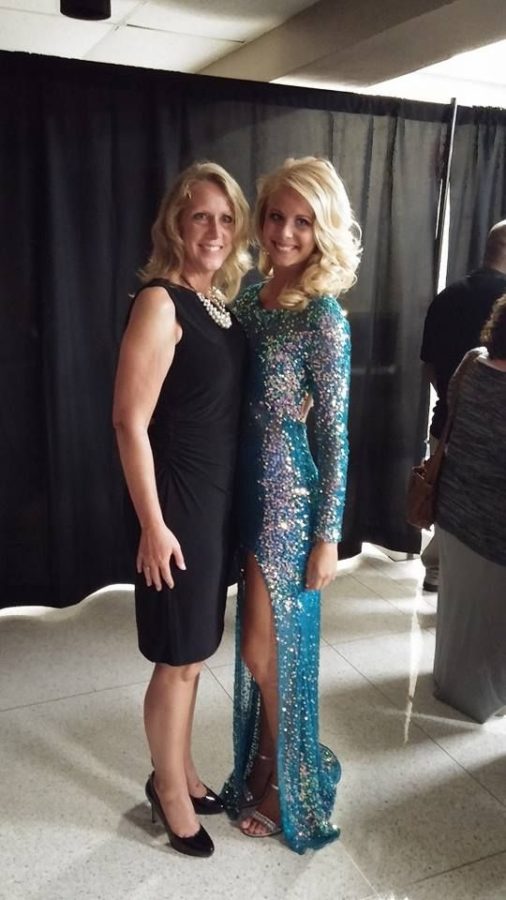 Simpson College senior Hannah Moulds did something she never expected.

“I am completely sports-oriented,” Moulds said. “Every girl likes to dress up and be pretty, but I was not about the full on evening gown and makeup.”

But on the weekend of Oct. 11-12, she dressed in an elegant gown, put on stage-ready makeup, stepped out of her comfort zone and competed in the Miss Iowa USA Pageant in Newton. Doing the unexpected was an experience of a lifetime, she said.

“I think in anybody’s case, if you’re pushed a little bit beyond your limits, you’re forced to adapt,” she said. “And that’s kind of what happened here.”

The 21-year-old track and field athlete is used to competitive environments; she’s been surrounded by them for years. But the Miss Iowa USA Pageant, she said, was nerve-wracking.

The support of family and friends, however, got her through. In fact, it was her dad who surprised her with the idea of joining the pageant.

Moulds said she used to model, which is how her dad started receiving emails from different agencies to further her career. When the Miss Iowa email came across his inbox, it caught his attention.

“It was pretty much all a whim,” Moulds said. “He pretty much, without me knowing, applied for me to get more information, and I was accepted, so I was able to look over everything.”

Her parents worked with her and sent in her headshot and a short biography about herself. She was accepted into the program last May.

That’s when the entire family kicked everything into gear. She needed four outfits: a swimsuit for the swimsuit portion, a business professional outfit for her personality interview, an introduction outfit that was black with silver accents and an evening gown.

“(There was) a lot of searching from bridal shop to bridal shop,” her mom, Tammy Moulds, said.

The outfits didn’t come cheap, and that wasn’t including the makeup, shoes, jewelry and participation fee. Tammy’s also not a professional makeup artist and said her family couldn’t necessarily pay for one.

But she worked her way through that for her daughter. She knew she had to. She spent countless hours watching makeup tutorials on YouTube and went to Younkers constantly to work with artists on choosing the right colors and learning what worked with stage lights.

But even then, the preparation process didn’t stop there.

“Sponsors were a huge part of getting ready,” she said. “They were businesses I already had contact with. I worked at a golf course so they were awesome at helping support me.”

Moulds’ parents also pulled in extra connections to help their daughter find sponsors, and this is where the town became part of the family. Their family comes from Panora, a city with a little more than 1,000 people. People they reached out to did all they could to help.

“My hair was done by a family friend,” Moulds said. “I’m so blessed because she stepped up to the plate. She even told me, ‘Hair styling is not my strong point.’” But Moulds said she wanted to keep her look as natural as possible, and putting curls in her hair was all she needed.

“Thank the Lord I had a good hair day,” she said, laughing.

Tammy said members of the church also pitched in, and someone even hosted a bake sale where the proceeds would benefit pageant expenses.

Her Simpson family was also close by. Her best friend and roommate, Lesley Pearey, was constantly there.

“(I was) mainly keeping her calm and not going crazy,” Pearey said.

Moulds said Pearey was a huge help, constantly shopping with her and providing her with constructive feedback.

And that’s not all – Moulds even got support from more than 1,000 miles away.

Moulds didn’t know who else would be here for her until the morning of the pageant. Her boyfriend, Brett Crable ’14, flew from Arizona to surprise her.

“I woke up and he had this big long post on Facebook about how he just landed in Iowa,” she said.

Crable said he knew how important this was to her and wanted to be there to support her in a once in a lifetime opportunity.

“From Arizona, it’s a little tougher to get back and forth, but this was something I definitely wanted to be there for and it wasn’t a problem getting out there just to see her and support her and to really make it about her for a weekend,” he said.

He planned this trip a month and a half in advance and worked with Tammy to secure a ticket. While he couldn’t stay for both days of the pageant, he hopes he still made a positive impact as a support system.

“Just being there, you could see that Hannah was excited beyond belief,” he said.

Moulds and Crable say they only got to talk for 10 minutes before she had to start focusing on her pageant responsibilities for competition day, but the memory will last even longer.

“It was so fun and the coolest experience even for me that I’m never going to forget and this is something I can share with her forever so when she looks back, I was there for her,” he said.

Crable said overall, he’s proud of seeing Moulds step out of her comfort zone with a goal to represent Iowa.

“Hannah’s a one of a kind individual,” he said. “This pageant was huge and everything she was balancing through this whole past month had been overwhelming, and for her to stay as composed as she did and kind of take it one step at a time, it was just remarkable to watch and that’s how she goes about everyday. It’s nothing new for this pageant and she handled it like a champ.”

And Moulds’ takeaway from the pageant ties in with balancing life.

Competing in a pageant is never easy. Moulds stayed dedicated and constantly practiced. It was hard for her, even with an athletic background, to focus the night before.

“I was super nervous to the point where I was almost making myself sick,” she said. “I was just so scared. It was the unknown.”

With time moving forward, she said it was in God’s hands and all she could do was enjoy the moment.

“Time was going to move forward,” she said.

The swimsuit competition was the hardest part to overcome, she said.  With a tendency to be self-conscious about her body, she didn’t know what to expect. But the pageant helped clear her mind on that.

“The first thing you see when you walk into the auditorium is Miss USA – Confidently Beautiful,” she said. “They really focused on making sure you felt confident. They wanted you to really embrace what you look like. They really push for that and that kind of helped me. As soon as I saw everybody in the same boat, I was at ease.”

It was a courageous feeling, she said, remembering feeling like a warrior. It reminded her to feel comfortable in her own element, which ties in with everything else she stands for. Her personality interview was just that – her personality. During that portion, they asked her what her favorite meal to make for others was.

“My favorite meal to make is homemade pizza because it’s absolutely amazing,” she said. “It’s me. It’s something fun and anybody can put anything on it.”

And they also asked her about her dreams – a difficult question for most, but Moulds just wants to give back to her parents.

“When I get to where I am at (in the future), I not only want to be able to take care of myself and my family, but I also want to give back to my parents,” she said. “We did not grow up with much. My parents didn’t and we didn’t. You always hear about how money can’t buy happiness. It can’t buy happiness but it makes you comfortable, and that’s all I want for them.”

While she didn’t place in the pageant, she walked away with life lessons and a reminder to embrace who she is, the people who support her and where she comes from.

Moulds is majoring in integrated marketing communications with a creative emphasis and minoring in coaching. She hopes to work in the multimedia side of sports once she’s finished with Simpson.

Does she ever want to compete in Miss Iowa again?

“As of right now, I’m just kind of recovering and just trying to enjoy all there is left of my senior year,” she said. She just wants to enjoy senior year and start planning the rest of her life and whatever that may consist of. Whether or not she’ll compete again will come later, she said.

But she does know what is in her life now from the unexpected.

“(The pageant) completely changed not only the way I see myself, but you find inner beauty in other people,” she said.