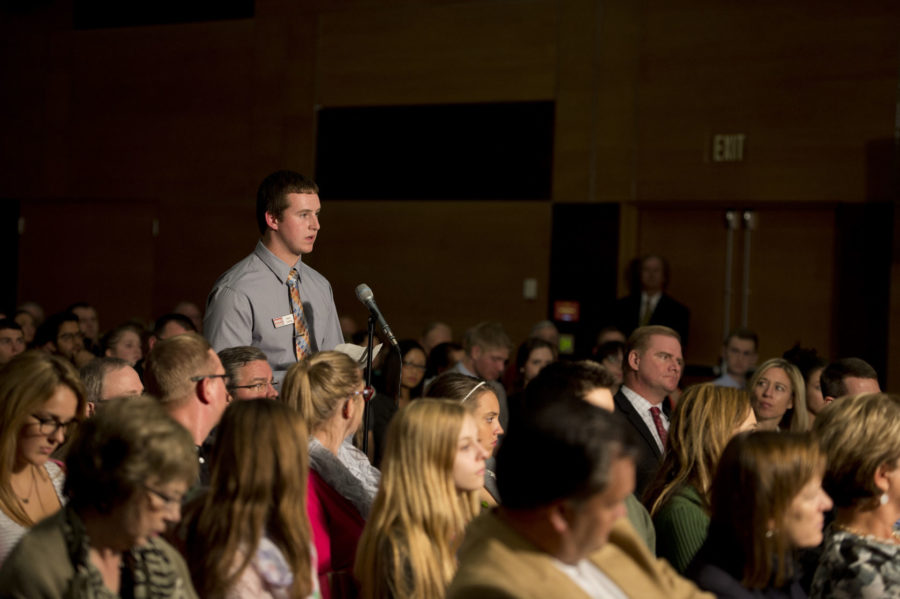 It took candidates less than 90 seconds to attack each other in opening remarks during an election debate that left many attendees feeling disaffected by vague explanations and repetitive catchphrases.

Democrat Staci Appel and Republican David Young, both running for the U.S. House of Representatives, took the Hubbell Hall stage Monday night in the second televised election debate hosted by The Des Moines Register and KCCI-TV.

Young, who had the first opening remarks, briefly summarized his personal history before attacking Appel as a ‘big spender’ who ‘supports allowing terrorists passports’. Appel then briefly characterized her record as focusing on equal pay and early education policies before addressing Young.

“Maybe I wasn’t clear enough, but once again I do not support giving terrorists passports,” Appel said.

Freshman Nick Laning and junior MacKenzie Bills, both Fellows at the John C. Culver Public Policy Center, were each given time to ask each candidate questions separately. Bills, who addressed Young, wanted to know which Social Security reforms Young would support if elected.

“I feel he kind of skipped the point,” Bills said. “He’ll point to the fact that it needs to be reformed, it needs to be fixed but he likes to secure Social Security for the senior base. He tries to play both sides.”

“She kind of circumnavigated the question, like a lot of politicians do,” Laning said.

On issues like a minimum wage increase proposal, U.S. intervention in the Middle East and gun control issues, both candidates split down party lines with careful agreement on improving policies for middle class families. Neither candidate would support legalizing marijuana and Young called on the attorney general’s office to enforce federal policy in states like Colorado where it is legal; both candidates thought allowing sick individuals to purchase cannabis oil should be ‘discussed’.

“I honestly was surprised at how vague a lot of their answers were,” Anderson said.  “I know that it’s kind of in the nature of politicians to avoid questions, but I was looking for more concrete answers.”

“I challenge you to find two less telegenic people running for Congress in the US (my wife’s take on the debate) #DullandDuller,” Simpson professor Kedron Bardwell tweeted.

While Anderson and Bills both thought Young was a more prepared speaker, Laning felt it was a draw.

“Leaning Republican, I would like to say that David Young did better, but I think it was kind of even, because of the almost – the not answering many of the questions,” Laning said.

Anderson, who preferred not to share who had her support, said the debate did impact how she’ll vote in the election.

“It definitely gave me more of an opinion,” Anderson said.