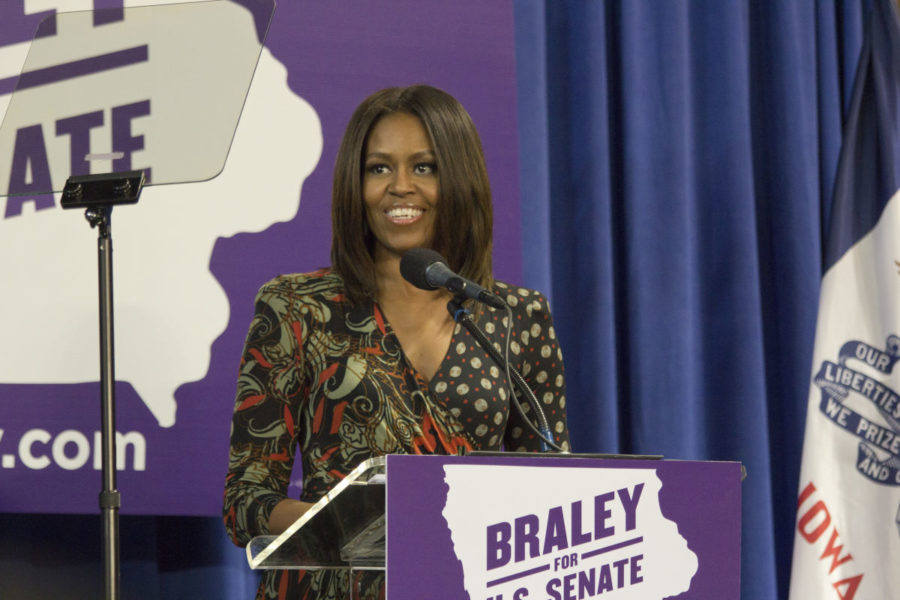 Michelle Obama visited Drake University Friday for an “Iowa Votes” rally to support Democratic candidate for Senate, Bruce Braley, and to talk about the importance of early voting.

The Drake University field house was packed with students and citizens to hear Obama speak.

In the stands, supporters waved signs chanting, “I believe that we will win” and “We love Bruce,” while a live band provided entertainment.

for support during this tight race. “There’s a lot at stake in this election,” Braley said. He’s

looking towards early voting for help.

Braley introduced Obama and the crowd burst into applause as she waved to the audience. Obama immediately began discussing issues such as women’s rights.

“If you want a leader who shares your values and will stand up for your values out in Washington, then you need to vote for Bruce Braley,” she said.

after hearing comments from the crowd.

Obama then quickly turned the focus back to college students.

“That’s why we need you young people. You need to help us out,” Obama said.

After the event, attendees reflected on the speeches and the importance of voting.

Simpson student Jazmine Johnson said, “The reason young people should be voting is because he brought up a lot of good points about tuition, education and health. I really believe that’s what a community should be based on.”

“What stood out to me the most was the way she talked about family and her life, which is something I can relate to,” she said.

Assistant dean of multicultural and international affairs, Walter Lain, took a group of Simpson students to the event.

“Traditionally, students have played a vital role in shaping our country and I think it’s important for Simpson students to do that,” he said. “We don’t have mountains or oceans, but Iowa makes up for it politically.”

“It’s about their future. It’s about issues. Young people have to get involved now so we don’t continue to do cosmetic stuff. We need to start addressing and dealing with systemic changes and young people will be able to make it happen,” he said.

“If we don’t come out and vote, we lose,” he said. “We are always able to win when Democrats get out to vote and get the early vote out. We have to and we work hard at it.”

After the event, attendees were encouraged to walk to the nearest voting station to cast their

vote early. With only 23 days remaining until the election, tensions are higher than ever as both

sides are fighting to determine Iowa’s future. The latest Des Moines Register poll shows Ernst with a one point lead over Braley.