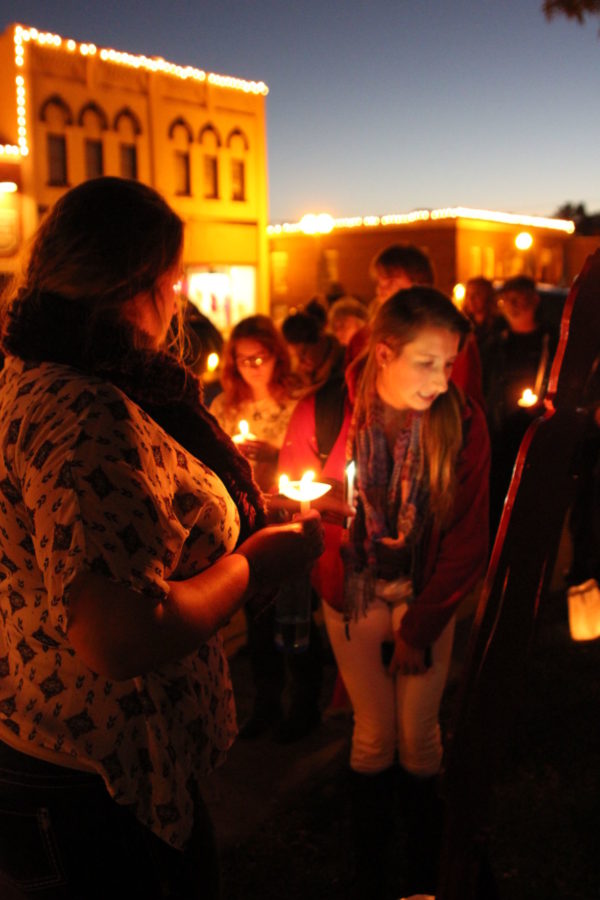 When Tiffany Allison reached out to the police in September 2009, it was only because she knew her boyfriend has no intention of letting her live through the night.

“I was very lucky that I made it out of the house the night that I contacted them,” Allison, a non-traditional Simpson College student said.

Her offender was sentenced to two and a half years in prison for domestic assault with a weapon but only served ten months of the sentence.

“Automatically when an offender walks into the prison doors, they’re credited with good time and it effectively cuts their sentence into one-third,” she said.

Her offender was able to cut his sentence down even further by doing programs and working through the prison. Twelve months after he was released, he offended someone again, and in the process permanently disfigured a woman’s face through biting her.

“For me, that was several things,” Allison said. “It was when I started to actually deal with what had happened to me and coped with identifying that I was a victim. And then also, it became a point where I felt like I needed to recognize that there was a problem and that a lot needed to be changed with violent offenders.”

After Allison began speaking out about her experiences, she wrote a bill to negate the good time policy for violent offenders.

“Basically, it is a third strike bill so they would have to be on their third violent offense. It is for any crime against a person. So if you commit a crime and harm a human being in the process you qualify,” Allison said.

The bill, called “The Violent Habitual Offender Bill” would mandate a five-year prison sentence to any third-time violent offender and would require them to serve 85 percent of their prison term.

Allison shared her story at the Warren County Coalition Against Domestic Violence’s annual Hope Towards Healing event on Oct. 20 at the Brickhouse Tavern to bring awareness of this issue.

Volunteers read poetry and played songs about domestic violence in the restaurant with the same hopes.

Sophomore Kat McCaffery and senior Andy Ardueser read a poem entitled “One Color” at the event.

“I want to do everything I can to bring awareness and stop it or lessen it because I know it, realistically, can end,” McCaffery said.

After the poetry readings, Simpson SARA members lead attendees through a candlelight vigil in the square and read accounts of victims killed in result of domestic violence from Warren County.

Jordan Kenkel, president of SARA, said, “I think the most surprising thing was that all of the victims were around the area, either directly in Indianola or in Waukee or in Des Moines, South Des Moines, East Des Moines. I think there were at least 10 accounts of victims so that was pretty shocking that they were all in this area.”

According to the National Coalition Against Domestic Violence, one in three women and one in four men experience an act of physical violence by an intimate partner sometime in their life.

Emmalee Bowlin, vice chair for the Warren County Coalition Against Domestic Violence, said spreading awareness through events like this is a good way to start talking about the issue.

Bowlin said, “It’s just one of those things that not enough people talk about. I want people to talk about it. I want victims to be comfortable in coming forward to get the help they need. I’m tired of people putting it to the side and brushing it off like it’s not their business. We should care, we’re humans.”

Everyone should care about domestic violence because they are affected by it, no matter how indirectly, Bowlin said.

“They are someone or they know someone who’s been through it,” she said. “It’s a very large percentage of people who are victims of domestic violence. It doesn’t pick and choose who it wants to affect, and I think people forget that sometimes.”

If you or somebody you know is suffering from domestic violence, the first step is to tell someone.

Allison said, “Tell someone, tell anyone that you can trust but make sure that you tell someone. It’s very scary when you feel like you can’t tell anyone what’s happening to you.”

There are many reasons victims don’t leave their abuser or tell anyone about the abuse, whether it’s because they’re afraid of judgment, ashamed of the abuse or fearful for their well being.

Allison said, “It’s very important that somebody knows so they can support you and help you and assist you when you’re ready to leave.”

There are many resources on campus to help students suffering from domestic violence. SARA is available 24/7 by phone at (515)330-6392 and counseling services are available on weekdays from 8 a.m. to 4:30 p.m. in Kent Campus Center.