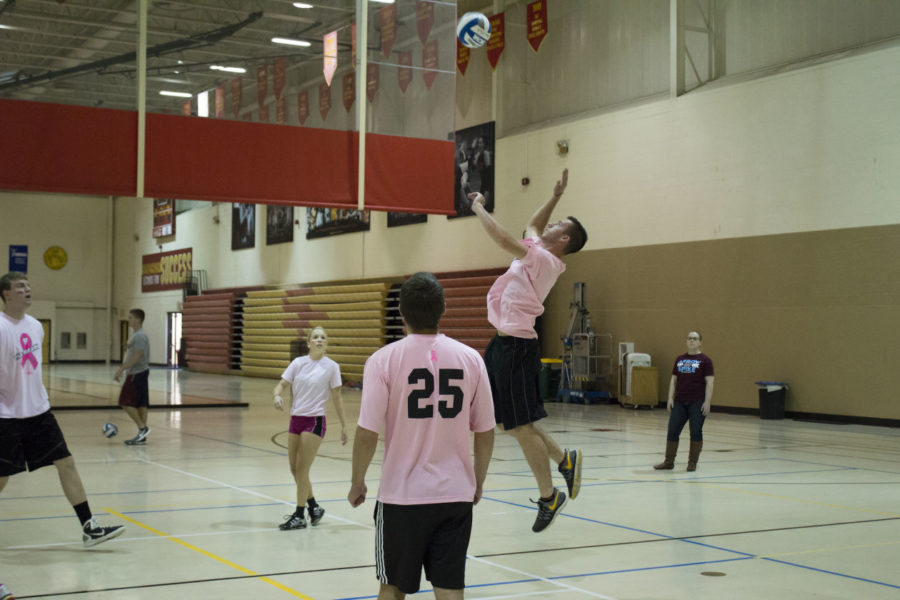 More than 100 Simpson College students showed off their competitive spirit by competing in Pi Beta Phi’s Arrow Spike fundraiser last Sunday. The volleyball tournament was put on to raise money for First Book, an organization helping children of low income families learn how to read.

Shannon Rohlk, Vice President of Philanthropy in Pi Beta Phi, started organizing the event last December. Rohlk and the philanthropy committee of seven are in charge of gathering money for fundraising and organizing different fundraising events.

“There were 12 teams. I wasn’t expecting that many people to show up or teams to sign up even. I was expecting about 6 teams, so it was really great to have support of the campus and people in general,” Rohlk said.

According to The Huffington Post and firstbook.com, 250 million school-age kids out of 650 million are not able to read. By providing money for organizations such as First Book, Pi Phi will help this number decrease. First Book has distributed 115 million books in their 21 years of service. First Book’s purpose is to improve communities and literacy rates by providing age-appropriate books for children whose parents cannot afford education materials.

“Not many children get the opportunity to read, so we support this organization.” Rohlk said. Each team had an entry fee of $30. All the profits from the events were given to First Book, and First Book will nationally distribute the money.

The volleyball tournament was double elimination, so all participants played at least twice and had a chance to win a prize donated by local businesses. Popular businesses such as Outside Scoop donated gift cards to the top three winning teams.

Participants were also awarded for best costumes. Players showed up in spandex and matching uniforms to impress judges.

“It was awesome to see all the Greek organizations coming to support Pi Phi, and the rest of the campus coming out to support our great philanthropy. You can never go wrong with a little friendly competition and free pizza,” Jessica Schultes, Vice President of Fraternity Development, said after the tournament.

Schultes played in the tournament and finished third overall with her team, “The Misfits.” The tournament was made mandatory for sorority members in the house, but no consequences were enforced if they did not participate. Most either participated in the tournament or volunteered. Participating in different philanthropy events earns each member “points” in the house. Each “point” benefits members with rooming, parking and social events.

Pi Phi aims to raise $65 per member in philanthropy each year. To reach this goal, the sorority hosts events throughout the year such as Pie a Professor, Arrow Spike and Valentine’s Day carnation sales.