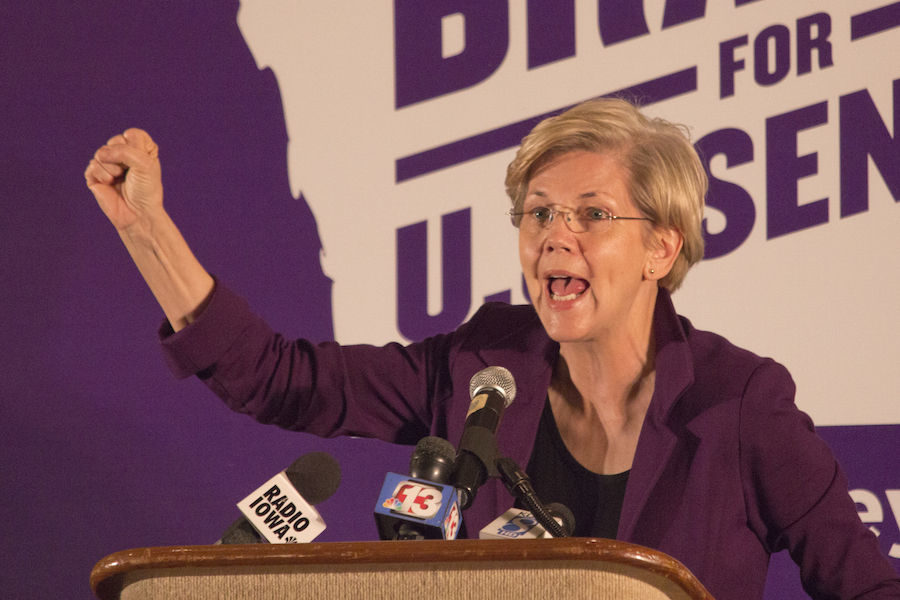 “Run Liz Run,” was shouted as Sen. Elizabeth Warren from Massachusetts walked on stage to a crowd of more than 600 people to campaign for Rep. Bruce Braley. There are 12 days until the final day of voting for the midterm elections, making the excitement from the stage contagious.

The speeches at the Hotel Fort Des Moines on Sunday focused on how the GOP is failing and the Democrats will prevail in November, if voters get out to the polls. Warren fist pumped and rallied the crowd to yell with her, “Are you ready to do this?”

Warren mentioned she just left Minnesota where she met with Sen. Al Franken and urged the importance of every person to vote. “Al won in 2007 by just 312 votes,” Warren said.  “The people that are going to determine this election are right here in this room.”

Warren spoke for about 30 min., reflecting on her past but focusing on education, infrastructure and research to rebuild the America she knew in past generations.

“Democrats believed that college students were entitled to try to get an education without being crushed by student loan debt,” Warren said.

Warren, previously a law professor for more than 30 years, including nearly 20 at Harvard University, emphasized the importance of education and college affordability in the mid-term election.

MacKenzie Bills, junior at Simpson College said, “This election is important because we will be deciding who Iowa’s voice will be and the control of the senate.”

“A lot of students at Simpson receive Pell grants and would not be able to attend school without them. This election will decide who protects these grants,” Bills said.

Braley’s opponent, State Sen. Joni Ernst, has been accused of wanting to abolish the Department of Education if elected.

“We have the Department of Education for a reason,” Bills said. “Students need to look at what she is saying because taking away this department and its entities will change how higher education is looked at across the country now and in the future.”

Braley and Warren agreed to make the government work for the people. “I’m a bridge builder, not a bridge burner,” Braley said.

Warren got the crowd cheering loudly as she talked about her family struggling as she grew up and still made it to the U.S. Congress.

“I am the daughter of a janitor who ended up in the United States Senate because I grew up in an America that was building a future for all its children,” Warren said.

The atmosphere in the room was filled with passion and nerves as Election Day draws near.

“Warren spoke with passion and was engaging,” Bills said. “Bringing Warren here means the election is super close and everyone in the country is looking at Iowa.”

“Every vote counts because the direction of our state and country will be effected by the outcome of this election,” Bills said.

Braley and Warren joined hands as U.S. Senate signs waved in the air and the crowd cheered.

Bills said, “Look at the candidates and vote. Other countries don’t have the right to vote, we need to use ours. The time is now. Go vote.”