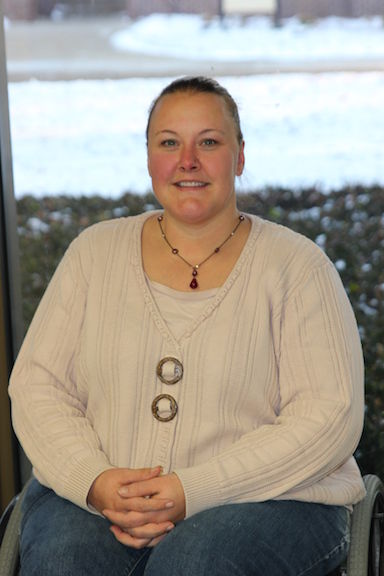 As winter approaches, Simpson College students are preparing for a battle against slippery sidewalks, frozen doors and harsh temperatures. It is an inconvenience to navigate these obstacles on foot.

It is hard to imagine traveling through winter’s severity on wheels.

Simpson’s campus is accessible for disabled students according to the Americans with Disabilities Act, but is it accessible enough to benefit its students?

Holly West is a sophomore art education major at the college. She commutes from Greenfield, Iowa every morning to attend her classes, and she has struggled with certain aspects of Simpson’s campus few other students can fully understand.

West has been using a wheelchair for approximately 23 years.

She believes that while the campus is technically accessible for students with wheelchairs, it is not accommodating and needs a lot of work before it can be considered advantageous for disabled students.

“I did not realize how dated the accessibility was here,” West said. “I don’t think it would have deterred me from attending if I had known before, but I could have been better prepared and would have spoken about the issues before I even began.”

Some of the most dated aspects West would like to see updated include restroom facilities, ramps, and pathways.

Almost every building on Simpson’s campus has an accessible first floor restroom. However, according to West, many of the stalls in older buildings are too narrow and would not accommodate larger wheelchairs.

“It would take a bit of reconstructing to fix the restrooms, but it really is necessary,” West said.

The ramps are another issue capable of preventing a disabled student from attending classes. West explained how some ramps, such as the one entering Wallace, are too narrow and have sharp turns. While she is able to handle these turns, a larger or motorized chair would not be capable of maneuvering the turns.

“It isn’t a matter of tolerating something when it comes to this. It is an impossibility,” West said.

One of the biggest issues lies in the pathways throughout campus.

Many of the sidewalks and the cobblestone on campus have cracks and gaps. This is not, West acknowledged, a fault on Simpson’s behalf, but a natural occurrence from the ground moving. However, it can be difficult to travel on – especially during the winter.

“If you see me zig-zagging or veering side to side, I am not a drunk driver, but my chair moves with the evenness of the land,” West said.

Winter can make all of these issues harder to handle. The ice and snow can keep an automatic door from opening, a ramp slick and pathways not cleared of snow impossible to travel on.

“That is my biggest pet peeve,” West said. “The snow and ice removal is below par, and I have issues just about everywhere.”

West has spoken with school faculty about the issues caused by winter weather, and feels that they have tried to be accommodating. However, the actions taken, if any, have not been done efficiently.

This has affected, to an extent, West’s educational experience at Simpson.

She admits not coming to class at all in the past because she knew it would be impossible for her to enter the building where her class was held. Furthermore, she knew nothing had been done – such as laying salt – to make the trip easier.

“I feel there are things that could be done that I don’t think I should have to speak up about,” West said. “I do find a lot of times that there was not a lot of preparation.”

Todd Little, director of Hawley Academic Resource Center, helps to provide disability services ranging from allowing students to have extended time for exams, allowing exams to take place in the resource center office, having other students take notes for disabled students and providing support when issues arise on campus.

Little has worked with several wheelchair-bound students for about 16 years.

“A lot of the conversation can begin with me. If I cannot directly help the student than I will take the issue up higher,” he said.

West also voiced a fear about where her classes are often located: the second floor. While most buildings have an elevator to transport students up and down different levels, these would not assist in the case of a fire.

Instead, if a fire or other emergency took place while a disabled student was located on an upper level, the student could become trapped.

“It is something I try not to think about,” West said. “It could be life threatening.”

Little addressed this fear and said, “If we cannot use the elevators, we will work with the student, security, and campus services. We would work to get that student down.”

West believes it would help to ensure classes containing a disabled student were placed on the first floor so the students would be capable of escaping themselves in the case of an emergency.

The college, despite these efforts, is still challenging to travel in. This is a potential cause for an underrepresentation of disabled students living or studying at the college.

“As with any student in any school, if you do not feel represented or supported, than that is not a place you want to be,” West said.

It is possible if the college modernized the accommodations on campus, disabled students would be more capable of joining the Simpson community.

Ultimately, West is happy with the help she has received from Simpson, but would like to see more effective, efficient and timely accommodation become available. This would not only make the campus more welcoming to potential students, but would make campus safer for everyone living there.

“I am so used to things being the way they are,” West said in regard to the issues she faces on Simpson’s campus. “I don’t even realize it until someone asks me or something comes up to really make me think about it.”

After graduation, West plans to become a teacher wherever she can find a school willing to accommodate her disability.

“These issues are going to be everywhere,” she said.