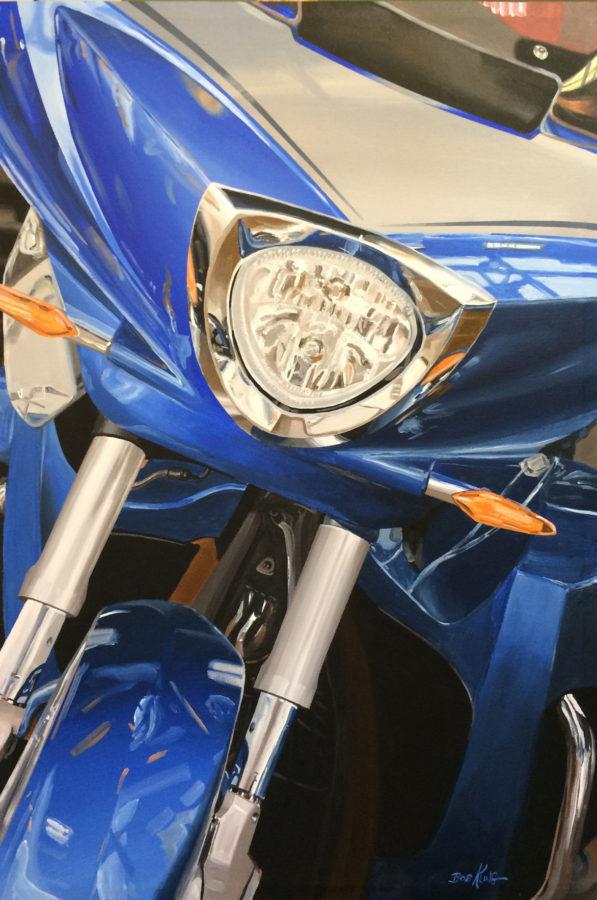 All year round, Willis Gallery provides students the opportunity to sip on their coffee, get comfortable in the couches and relax. However, the best part about the gallery isn’t the cozy environment or the warm ﬁreplace, but the art.

“The Des Moines landscape is really what I was after, so I went up and took photos. It was not that much fun to paint, because there were so many straight lines compared to the motorcycles, the automotive type stuff, but I think the result turned out pretty good,” Kling said.

Kling has been teaching for nearly 40 years and has travelled the country to showcase his art. “It’s fun to take what you see, and then all of a sudden zoom in and make it big. Then it’s like we’ve made it into something else. It’s more than a motorcycle. It’s more than an engine. It’s more than a car. It’s more than a building. And I think it’s the job of the artist to point it out; these everyday things that are really more exciting than you think they are,” Kling said.

“Sometimes I work a little rough; I’m not as reﬁned as some people. I don’t mind when roughness shows up because I ﬁgure that’s my style.”

Richmond used basic shapes and colors in a Bauhaus style as a way of saying that all matter is made of these, which is one of the themes within his art. “It’s a visual representation of sound, or something that reverberates. So, it’s about mixing visual and sound together,” Richmond said.

His other piece focuses on math and geography. “I’m trying to understand art, life, everything and then portray it.” Richmond said.

“It’s all about trying to visualize things that are on your mind. I have ideas that I want to express and it all comes from inside and I need to express them. So, I put them out there in one form or another, the best way that I can for people to see what I’m thinking about, and I think that’s what art is, in its purest form.” Looking towards the future, Richmond has expressed interest in creating sculptures.

Kling is already looking forward to what his next piece of art will be. “The next one; your favorite piece should always be your next one.”