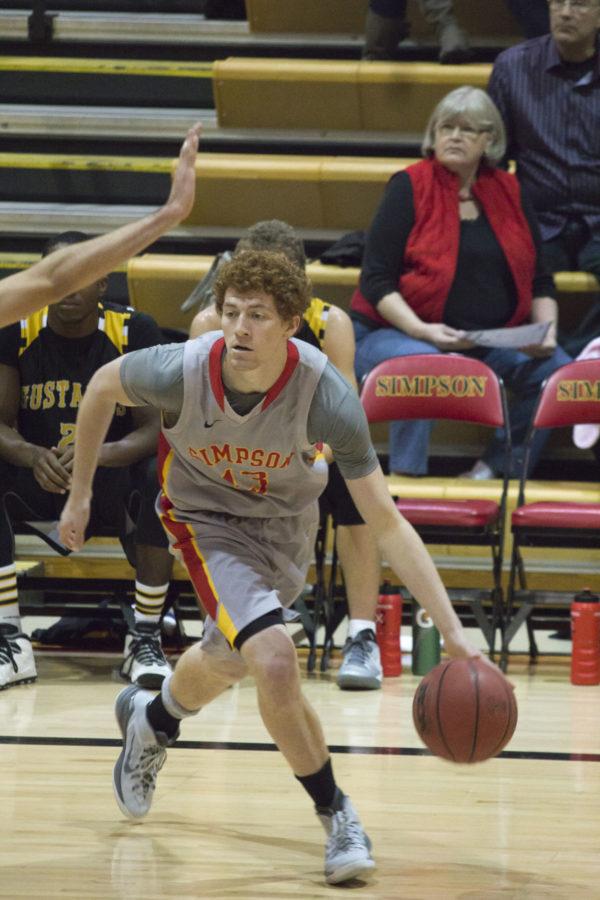 The Simpson College men’s basketball team kicked off their 2014-2015 season going 1-1 as they took on two Minnesota Intercollegiate Athletic Conference teams at Cowles Fieldhouse this past Saturday and Sunday.

The Storm fell behind early in their season opener with Gustavus Adolphus College of St. Peter, Minn., heading into the half trailing 40-24.

A 15-0 second half run helped give Simpson the 49-48 lead with 6:42 left in the game, although the Gusties staved off the threat to hang on to the eight point victory.

“Well, the first half against Gustavus was tough,” head coach Charles Zanders said. “I addressed [the Storm] at the half, saying it’s time to wake up and it starts on the defensive end and they came out and were the team I expected them to be in the second half.”

Despite the loss, the Storm had positives to carry away from the game as they played with resiliency and cohesiveness

Freshman Sam Amsbaugh played a well-rounded game, leading the Storm in points with 12 and seven rebounds while junior guard Chad Gutschenritter was close behind with 11.

Unfortunately for Simpson, they’ll have to move on without senior captain Tyler Anderson who suffered a shoulder injury early in the first half as he made a block on a Gustavus Adolphus fast-break lay-up.

“Obviously, when you lose a player of Anderson’s caliber, it’s going to hurt”, Zanders said. “But, we expect DJ Dafney to step up and fill his shoes as we expect to not miss a beat. I’m sure Tyler will be there in his ear making sure he does what he needs to do.”

Anderson’s return to the court is uncertain as he undergoes rehab on his shoulder.

Men’s basketball came back out on Sunday, virtually controlling the game from whistle to whistle as they cruised to a 13-point victory over the Auggies of Augsburg College (Minneapolis, Minn.).

“Against Augsburg, we carried over the momentum from Saturday’s second half,” Zanders said. “We played within ourselves and played by committee.”

After going 2-10 from the field on Saturday, senior captain Charles Swain lead the team with 17 points, knocking 6-7 free throws down as the Storm stroked 21 from the free throw line.

The feeling in the locker room was positive after Sunday’s win over Augsburg (1-1).

“This was a lot better start in our first couple games than last year’s,” junior guard Chad Gutschenritter said. “We just wanted to get out and get to a good start and we did that. We played really well, with good team basketball and we are all happy with the start.”

Simpson (1-1) beat an Augsburg squad that took down IIAC foe, Buena Vista, the night before.

6’2” sophomore, DJ Dafney filled in for the injured Anderson, adding a spark as he scored 11 points and three steals in 26 minutes of play.

Once again, the Storm couldn’t come away unscathed as 6’7” center, Cody Isabel out of Kansas City, Mo., had to exit the game due to a concussion. His status is day-to-day.

Despite the win, the Storm were outrebounded 40-24. With the loss of Anderson and Isabel, two capable rebounders, it’ll be interesting how Simpson fairs on the glass, a facet of the game coach Zanders stressed heavily for this season.

“One of the things coach emphasizes is rebounding,” Gutschenritter said. “We have to keep on carrying over the defense and improve with our rebounding as we got outrebounded two nights in a row.”

After a few days of tuning-up, men’s basketball will be back in action tomorrow night as they take on Northwestern (Minn.) before battling with North Central (Minn.) on Saturday. Both games will be played in St. Paul, Minn.

“We are going to keep building and talking about defense,” Zanders said. “That’s what we are going to have to keep doing in order to keep earning wins.”