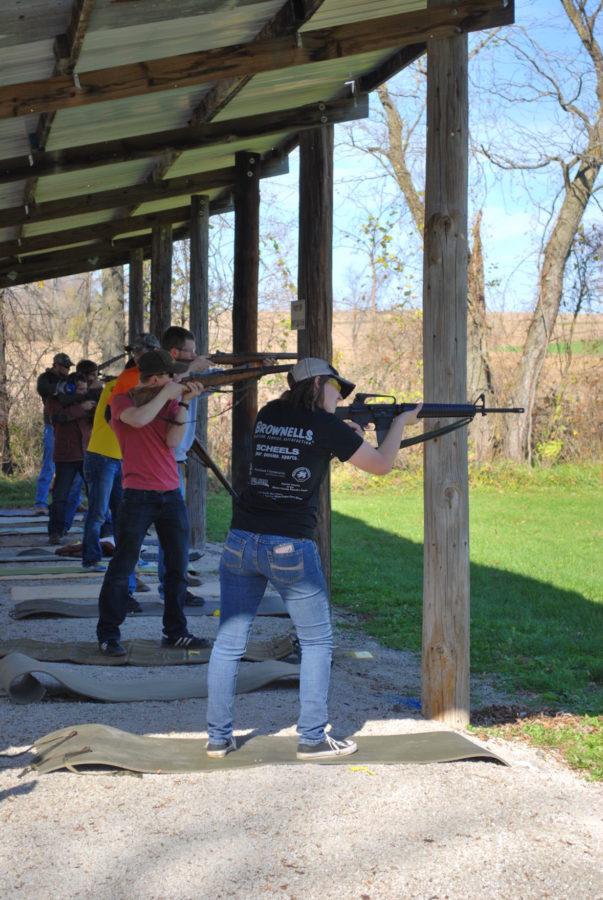 by Beth Schaefer/Special to The Simpsonian

The club was started by Dr. Adam Brustkern, assistant professor of chemistry, during the 2010-11 academic year.

Brustkern, who has always been passionate about outdoor activities, knew students were interested in recreational shooting and wanted to provide an opportunity for students to do so on campus.

Brustkern was able to request grant funding from the National Shooting Sports Foundation, an organization which aims to preserve hunting and shooting sports, and received $10,000 to start the club. The money was used to purchase shotguns, a safe, and ammunition.

Today, the Shooting Club, which is fairly small with its roughly 10-12 active members, runs things a little differently than most clubs at Simpson. Instead of weekly meetings, they have weekly shoots.

At the shooting range, the members are able to shoot guns in a safe, supervised location and also discuss upcoming events and competitions.

For students who may feel as though their interests are not very well represented on campus, the Shooting Club is a welcome thing.

Caitlin Dicus, senior, was the secretary of the Shooting Club her sophomore year but left during her junior year for research.

After learning the club nearly didn’t survive in her absence, Dicus decided to become president to keep the club active so students would still have an organization on campus that represented their interests.

“It’s important that campuses support their students’ needs and wants and I think we do that,” Dicus said.

“A lot of organizations are just another organization,” Brustkern said. “The Shooting Club allows students that have different passions to get together and be involved in that activity.”

The Shooting Club provides important information relevant to safety and self-protection. In the past several years, the club has sponsored various programs, from a women’s self-defense class to a hunter safety course.

The club also has a First Shot program, where students who have never shot a gun before are able to come and learn terminology and gun safety before having the opportunity to learn how to shoot.

The students who are in the Shooting Club also get the opportunity to involve themselves with other schools’ shooting clubs, especially Iowa State University’s.

While Iowa State does not have an official shooting club any longer, the college does have two similar clubs: a Trap and Skeet club and a Rifle and Pistol club.

The members of both Simpson’s and Iowa State’s clubs meet occasionally to have shooting matches. Recently, the colleges met for a rifle match.

“We shot either M1s which were shot in the Civil War or an AR-15 which is legal for shooting in rifle competitions,” Dicus said.

The competitions are not merely for shooting, but helping others to improve themselves. Simpson students were paired with an Iowa State student to keep everyone honest. In the pairs, the members were allowed to score each other on their shooting skills and offered others advice for things they could improve on.

“It helped us spend time with them more instead of just competing against them,” Dicus said

The Shooting Club may not be the most well-known club on campus, but with all of the opportunities they provide for students to learn personal and gun safety, they are extremely helpful to Simpson students.