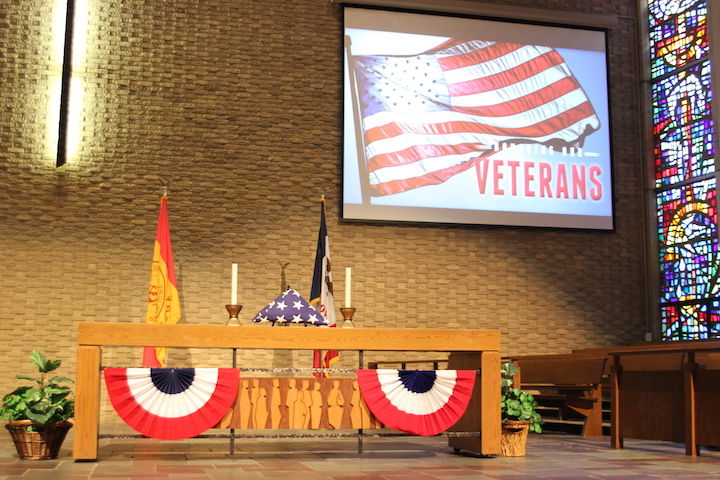 Simpson College’s first annual Veteran’s Day program was held on Monday to honor the men and women who are serving or have served in the armed forces.

In his opening statement, Cox emphasized honoring our veterans because they help guarantee U.S. citizens the core values our country stands on.

“It is through their sacrifice that we live the lives that we do today,” Cox said.

President Simmons spoke of the long history Simpson has had with the armed forces, from housing soldiers before being deployed in World War I and II, to enrolling students who had returned from the conflicts in Korea and Vietnam.

“The life that I live, the lives of my children, the lives that our students live, who have not gone on to serve, was made possible because those of you who did…and made sure that the freedom and the benefits of the economic prosperity that we enjoy today, were preserved, not only for your families, but our families, as well,” Simmons said.

Two veterans and Simpson students, junior Taylor McIntosh and freshman Danny Reetz, spoke about their service in the armed forces and what serving means to them.

Veteran’s Day, for Reetz, is about the soldiers who have come before him.

“Today, we have more support in the military than ever before. And there’s guys that served that came home and were spit on, and they’re finally getting the recognition that they deserve. And if I could, I would personally thank every single one of them,” Reetz, a Marine who served multiple tours oversees, said.

Students from the Music department performed patriotic pieces including “My Country ‘Tis of Thee” and “America The Beautiful” while the Communication & Media Studies department showed a video about the importance of Veteran’s Day in honor of the soldiers.