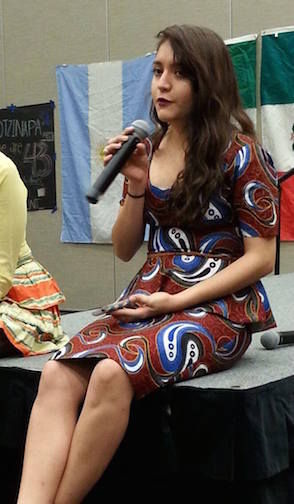 The event was small, providing an intimate space where students could interact, relax and learn more about the different cultures that are represented on Simpson’s campus. The Multicultural and International Affairs department, or MIA, hosted the event with Erica Barz, Simpson PRIDE President, as the emcee.

Students were encouraged before the show started to donate any spare change to help Doctors Without Borders in their goal to help cure Ebola. The showcase was a three-part event including a talent portion, cultural presentations and a fashion show.

The talent portion was first on the program. Simpson senior Ze Hui Ng started off the showcase with a piano piece by Beethoven, a song which she played for her senior recital.

“I’m always awed by the awesome talent that the international students have. There is no part I didn’t enjoy. It was all equally important,” assistant dean of multicultural and international affairs, Walter Lain, said.

Up next was Simpson freshman Valeria Gonzalez. Gonzalez played a Mexican song on her guitar while the audience clapped along to the beat. After the event, Gonzalez said that performing her song was her favorite part of the event and she talked about the importance of students attending MIA events.

“It gives you more knowledge about cultures,” she said.

After the talent portion, the showcase continued with a demonstration on how to wrap a head scarf by Jazmine Johnson, followed by a poem about the recent kidnapping and killings in Mexico by Simpson students Estefania Anaya and Mariana Quiñones. The second part ended with a true story about a family from Liberia who managed to overcome Ebola as told by Leah Otieno.

The showcase ended with a fashion show that featured handmade dresses from The Democratic Republic of Congo. The international students walked the runway to music as audience members cheered them on. Each model was given the chance to show off two different outfits and at the end, the audience was able to cheer for their favorite. Ultimately, every model was declared a winner.

The students in attendance, models and performers mingled after the event. Cameras were flashing as the students posed together and showed off their clothes as laughter and conversation surrounded the refreshment table as students ate cookies, chips and lemonade. Everyone was thanked for coming by Simpson student Grace Tshimoa.

“My favorite part was the fashion show and showing the cultural clothes. I also enjoyed the talent show,” Tshimoa said. She also discussed the importance of attending cultural events.

“Students should come so they can appreciate the diversity. Because there’s a lot of talk about Ebola, but people don’t know a lot about what’s going on, and also what’s going on in Mexico,” she said, “People can learn something new and something different from the international students that they might not already know. I would love it for students to come.”

Even if students were unable to make it, they are encouraged to donate to the Ebola fund. Different events will be going on throughout the week, giving students more chances to help out.

“We’re going to be in Pfeiffer throughout the week for International Education week, so certainly students can still donate to Doctors Without Borders. There’s also the very tragic situation down in Mexico that we’d like to bring awareness to as well. That’s a tragedy still unfolding, but it certainly affects us here as well,” Lain said.

Currently, MIA is trying to make sure more events like this happen in the future. An event similar to this was arranged a few years ago, and now the department is attempting to turn it into an annual event.

“We certainly invite students because we live in a global society and the news cycle is non-stop, so we’re all affected by what happens. So it’s important for students to be aware, but not just about the negative things we hear about in the news, but also the cultural, positive things,” Lain said. “Students here are really proud to show their heritage and to show culturally why things are important.”