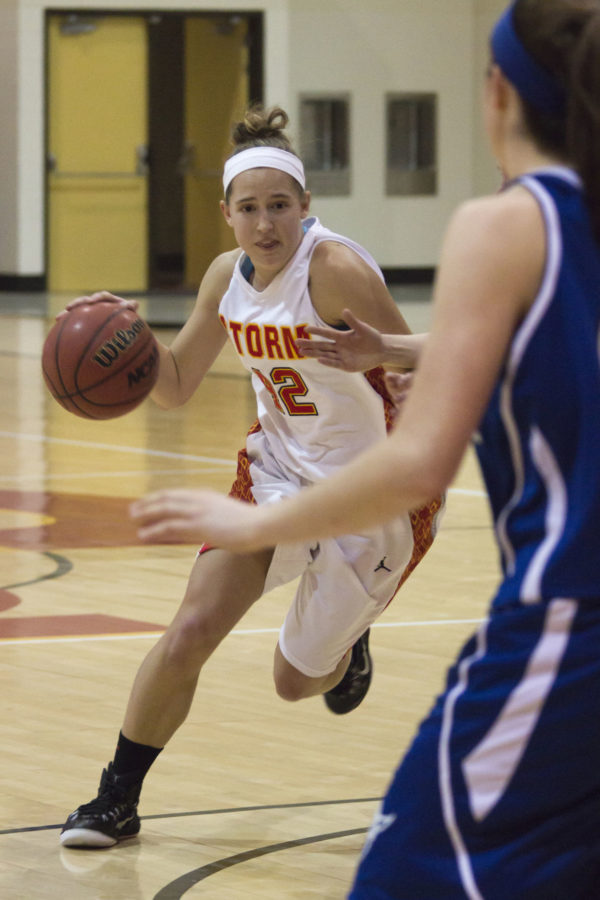 During her freshman season, Mackenzie Haupt found herself in only four games, not scoring a point as she waited behind the likes of Kate Nielsen and Nicole Crisp as the Simpson College Storm rolled to a 27-3 record and an NCAA Sweet 16 appearance.

The team success came first, but with a little bit of patience the individual success would come as well for Haupt.

Averaging 6.0 points per game her sophomore season, Haupt saw the court more. As a junior, though, she has not only seen the court but others recognized her play on it as she earned December female student-athlete of the month honors.

Her teammates saw this potential in her, and Haupt knew it was there, but now it came out between the opening and closing whistle of games.

“When she first came here she wasn’t exactly playing up to her full-potential,” roommate and teammate Morgan Mauro said. “She and I knew she could be an impact on the team though. I even remember one practice in which she was making all of her shots and it kind of hit everyone like, ‘wow, she can really do this.’”

These sizzling hot practices translated into games as Haupt shot 50 percent from the field while scoring 13.7 points per game in the month as the Storm got off to a 9-1 start by the end of December.

While leading the team in scoring at 10.0 points per game, Haupt has hit a 3-pointer in 13 of the team’s 17 games while knocking down 76.9 percent of her free throws – evidence of her versatility as a scorer.

“I think a lot of us know that she’s one of the most versatile scorers on the team,” Mauro said. “She can get to the basket, pull up for a jump shot or shoot from behind the arc. She gets to the line a lot too.”

Haupt, soft-spoken and characterized by the ‘lead-by-example’ style, isn’t blinded by her own success.

“I’m just happy to be given this opportunity and to be part of such an amazing team,” Haupt said. “It was great to be recognized as student-athlete of the month, but my success is really just part of what makes this team so special.”

Over the summer before her junior year, Haupt stayed on campus, lifting, running and putting in time on the court to bolster her game, understanding the position she’d have in the starting lineup as a junior.

This move wasn’t surprising to her teammates or coaches, but the extra work was definitely noticeable.

“MacKenzie worked really hard in the offseason,” head coach Brian Niemuth said. “I was impressed by how much she has improved, becoming one of our biggest threats offensively.”

A 2012 graduate of Clarion-Goldfield High School, Haupt was one of her team’s biggest threats, receiving all-North Central Conference honors as she lettered in four sports: softball, track and field, basketball and volleyball.

Although the demands on Haupt in high school prepared her for the rigors of being a student-athlete in college, she had to adjust to the level of play in college.

“High school taught me a lot about the time management aspect of playing a sport in college, but it didn’t actually prepare me for playing,” Haupt said. “College athletics, for me, was something that I just had to adjust to once I got here.”

Regardless of the adjustment, Haupt knew from the start that she wanted to pursue college basketball as she was also recruited by Central College and Buena Vista University out of high school.

It’s worked out so far and Haupt continues to make it look like a good decision on the court.

So while her favorite NBA team, the struggling Los Angeles Lakers, don’t have much else to play for this season, Simpson Storm women’s basketball has it all in front of them.

At 13-4 and 3-3 in the IIAC before Wednesday’s matchup against Central College, the Storm have eight more conference games to make a push at high seed in the IIAC tournament and hopefully the NCAA Tournament.

Haupt wants to be at the center of this push.

“My goal for the team is just to keep improving every game, make it to the NCAA Tournament and get as far as we can.”