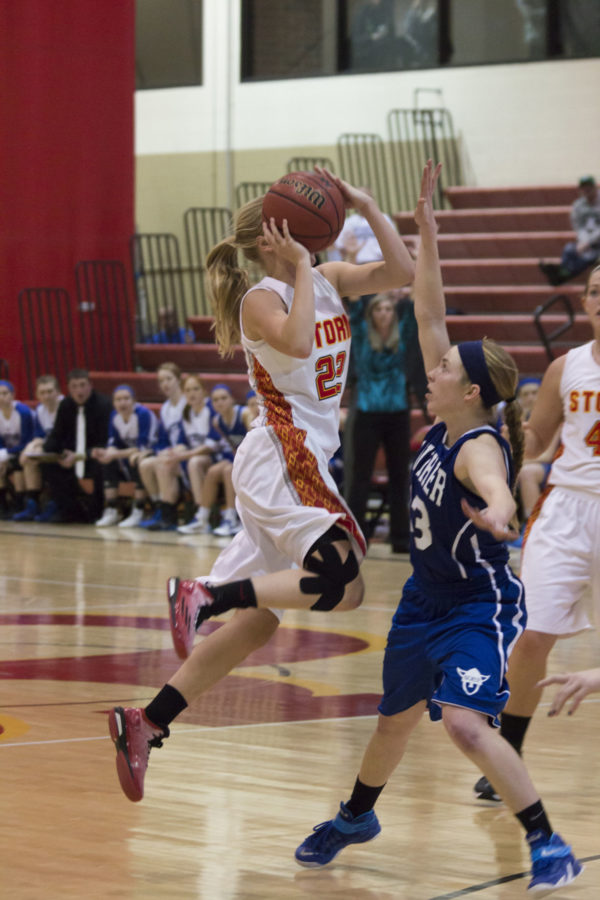 Luther College (14-2, 4-1), who came into play Wednesday as top-dog in the IIAC, not losing a game since Nov. 25, went back and forth with Simpson all-evening as there were 21 lead changes and 14 ties between the two teams.

The largest lead either team generated was seven points, as Luther held a slim 38-37 advantage at halftime.

The margin between the two teams didn’t fluctuate much the rest of the game, as the two teams were knotted up 73-73 with 56 seconds remaining in the game.

Coming out of the timeout, Britney Boland, who finished with 11 points and eight rebounds, got free underneath to give Simpson a two-point lead on her layup.

Luther responded right back though.

With 31 seconds remaining, Moran Lonning, who finished with 18 points, drained a 3-pointer that gave Luther a 76-75 lead.

On the next possession it seemed all but over for Simpson, as Rachel Kaale missed a point-black left-handed layup that would have given Simpson the lead with 15 seconds remaining.

Simpson would then foul as Luther extended their lead to 78-75 on two free-throws from Meagan Koepnick.

It was now down to one last shot for Simpson, and it would rest in the hands of Brittany Hedrick.

The Storm looked to get an open 3-pointer but failed to get any shot up until Brittany Hedrick launched a one-footed falling 3-pointer as she floated toward the hoop,

Not to mention, Hedrick was already two-feet behind the line.

None of that mattered though as her shot caromed in off-the backboard, tying the game at 78-78 as Cowles Fieldhouse was sent into a tizzy as time expired.

Luther’s Kylie Romeo, who had a team-high 19 points, would score the first basket in overtime, but from then on, Simpson held Luther to only one more point in overtime as the Storm received another four points from Bosworth and four from Whitney Van Wyk, giving Simpson the 88-81 in overtime.

Bosworth scored a career-high 25 points, a huge lift off the bench as Simpson’s bench outscored the Norse’s, 43-18.

The other 18 points off the bench for Simpson came from Megan Lankford and Katie Ahrenholtz, as Simpson held a Luther team that averaged nine 3-pointers a game to only six triples.

Van Wyk helped quell Simpson’s rebounding qualms as she reeled in a game high 11 boards while scoring nine as Simpson and Luther both recorded 44-44 rebounds.

This was the first game in IIAC play in which was not outrebounded.

With a huge win and most impressive win of the season for Simpson, the Storm move up one slot in the IIAC for fourth place.

Simpson is still behind Luther, Coe College and the University of Dubuque who all sit at 4-1 in conference play.

Simpson went 2-0 against the Spartans last season, including a 73-36 drubbing in Indianola.