Reflection: A day of observance, MLK Jr.’s message continues in 2015 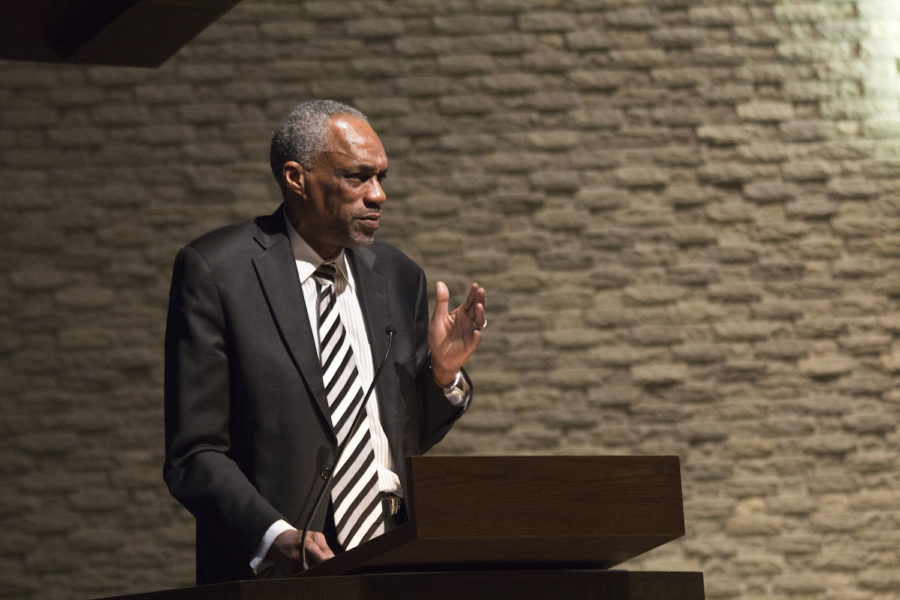 Martin Luther King Jr. didn’t just call for people to talk about equality and love; he called people to act and to make change. His message of kindness and service lives on, even 47 years after his death.

Simpson College honors MLK Jr. with an annual day of observance. It’s not a day off of class, it’s not a day to sit and think about helping someone else, it’s a day to get out and do something.

“It’s a day on, not a day off,” Dr. Thomas L. Hill, the keynote speaker at Simpson’s MLK Jr. Day of Observance, said.

The crowd for the event was, unfortunately, not substantial. Most students sat in the back, leaving a half-empty side of pews in Smith Chapel.

Hill exuded King’s message in his speech to Simpson students and faculty. “I am living proof of his legacy,” Hill said.

Hill is Iowa State University’s senior vice president for student affairs. His work ranges from promoting the mission and vision of the university to acting as a mediator among students, student groups and administrators.

Hill is not only an accomplished educator, but also a successful athlete. He won the Bronze Medal in the 1972 Olympics for the 110-meter high hurdles.

Hill is a passionate speaker who has a strong respect for King. “It is a deep-felt honor to be here on this day of observance. Dr. King is one of the people I hold in high regard and any time I have the opportunity to speak and be connected with his name, I consider it a high honor,” Hill said.

He focused his speech around the question King often proposed. “Where do we go from here, chaos or community?”

In 2015, this question is still relevant as the nation comes off a difficult 2014.

“We survived 2014, but it was difficult in so many ways. The gut wrenching and emotional impact of events like Ferguson and New York was almost too much to bear,” Hill said.

Hill talked about how MLK Jr. got angry too, but turned his anger into productivity.

During his speech Hill said we all can take our anger and transform it into a powerful, positive message. His suggestion for all of us is to “Pause. Take a deep breath. Then get to work.”

MLK Jr. Day is a day of service to “honor not only Dr. King, but all the people he cared so much about; the poor and disadvantaged,” Hill said. “King asked life’s most persistent and urgent question: what are you doing for others?”

Hill urged Simpson to extend the one day of service to 365 days of service so when “we meet again in 2016, our world would have moved forward and become a much better place.”

King was assassinated in 1968, but legislation to recognize him with a national holiday was not passed until 1983. Even then, some states didn’t observe the day or changed his name. The year 2000 marked the time MLK Jr. Day was observed as a national holiday in all 50 states.

“The slow recognition of the holiday mirrors the slow progress of civil rights,” Hill said. “The civil rights movement didn’t start in the 60’s, it started long before that. Others involved include George Washington Carver, who studied here at Simpson. He was someone we must also remember and learn from even in 2015.”

MLK Jr. Day is still the only national holiday to recognize a person of color.

Hill suggests accomplishing something positive at least once a day.

“Be there and volunteer,” Hill said. “You can transform a community. All it takes is one person to step up and go donate some time to volunteer, and the rest will follow.”

Last fall, there were 113 Simpson Wesley Service Scholars who served 3,887 hours with an estimated impact to the community of about $83,000.

At the end of the event, Professor Carolyn Dallinger spoke about the upcoming March to End the Isms event this spring. The march has taken place every year for 12 years and is planned for Friday, April 10 this year. The event begins at the Kent Campus Center, moves to the Indianola square and returns to campus for food and guest speakers.

To add to the march, a one-credit class is being offered this semester to help plan the march called Social Justice in Action, fulfilling the collaborative leadership requirement of the engaged citizenship curriculum.

“King was about love and kindness,” Hill said. “The kind of love to give you the power to turn an enemy into a friend or turn fear into compassion. He knew this kind of love was the only way to make things happen.”