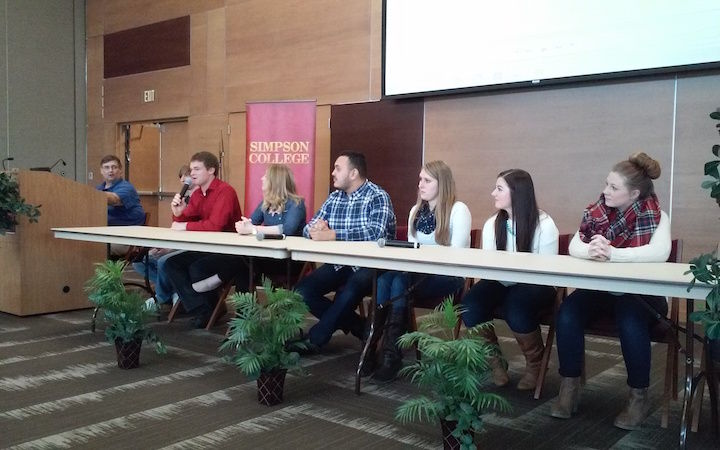 Bates said, “The whole idea of the course was getting the students from a theoretical base to being able to use their Spanish in the Latino community.”

The students, throughout the duration of the course, were able to listen to presentations, practice their Spanish language skills and sign up for a variety of projects allowing them to address issues facing Latinos.

Some of the projects performed by the 22 students included working with foster care families, raising donations for a local charity, registering Latinos to vote and promoting a scholarship for immigrant students.

Eight of the students involved in the course presented the work they completed and shared their experience with the Simpson community during the Small College, Big Questions forum event.

These experiences were valuable to students because, according to Bates, it helped answer questions regarding the Latino culture.

A dreamer, according to the American Immigration Council website, is defined as an immigrant who entered the United States before the age of 16, has lived in the U.S for a minimum of five years, has not been convicted of a felony and has attended, or is currently attending, a U.S school.

“Many of the students came to understand the difficulties the undocumented ‘dreamers’ face,” Bates said.

Ulices Flores is particularly passionate about helping the dreamer demographic. He said during the panel, “Dreamers are not asking for a handout, they are asking for an even playing field.”

Flores, president of Simpson’s organization Latinos Unidos, is also passionate about spreading diversity and educating students about Latino heritage. His group decided to talk to high school students, educating them on what opportunities college could offer, including organizations like Latinos Unidos.

They are continuing their project even though the course has ended and recently met with students involved in Upward Bound, a program providing support to participants as they prepare for college.

“Our main goal was getting kids educated and teaching them that there are a lot of opportunities out there,” Flores said.

Mentoring projects performed by Marisa McVey, Ashley McLaughlin and their team will also continue despite the end of the course.

During this project the group connected and interacted with two Latina middle school girls. They worked on fun and educational activities and were able to practice Spanish while communicating with the girls’ families.

“It was a team effort, really,” they said, while describing a difficult phone conversation that took place when one family got lost in Des Moines and needed directions.

McVey added, “You don’t have to look very far to find an opportunity to help. Just getting involved in volunteering and service, getting yourself out there, will help and the opportunities will come to you.”

Bates believes the course was, overall, a success and looks forward to teaching it again during the fall 2016 semester.

One lesson Bates hopes the students and the forum attendees have learned from the experience is, “Getting to know someone from a different culture is one of the most rewarding and enriching experiences you can have in your life.”