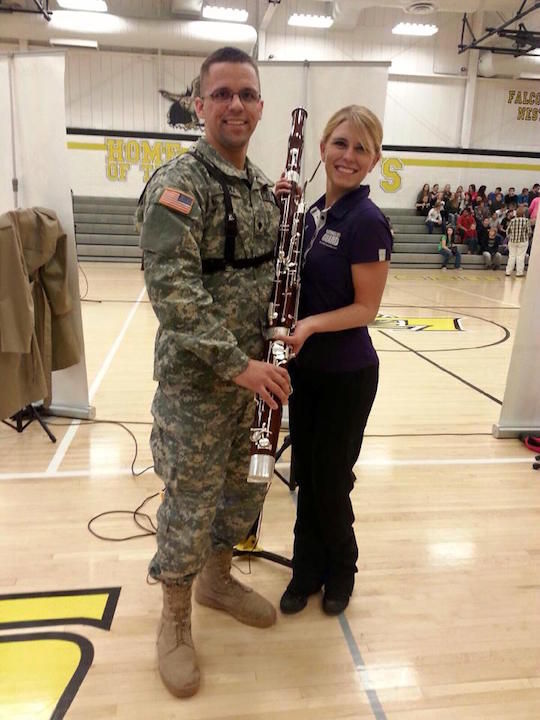 Imagine taking your college studies to boot camp, where you become an expert in your field and serve your country at the same time. This is exactly what Simpson College alum, Mark Meier and current Simpson senior, Ben Lempka, are doing as members of the 34th Army/Iowa National Guard Band.

Both men were able to pursue their passion of music on a whole new level when they joined the Army band. They tour the state performing music for schools and colleges, as well as special events like the most recent inauguration of Gov. Branstad at the State Capitol.

Meier sang the national anthem for the celebration and Lempka played his bassoon in the band. They were a part of the Homebase ceremony.

“Right in front of me was the governor, Lt. Gov, both senators and the major general of the Iowa National Guard, so it was a pretty cool, high profile kind of experience,” Meier said.

The experience was something Meier was honored to do and was only available because he joined the military band.

“I think there are two things I always feel pretty proud to do.  I’ve been a part of the honor guard with the National Guard, which is supporting military funerals. I think that that’s something that’s a pretty heavy responsibility, but also pretty important,” Meier said.

“The second thing would be singing the national anthem for things like this. It always makes you very nervous because it’s something that you want to get right. I wanted to represent not just my unit, but in that case I was representing the guard and the state of Iowa for some of the people who make decisions for how our state will move forward. I always find it to be a pretty honorable thing to do,” Meier said.

Meier was a music education major at Simpson and was involved in the Madrigal and Chamber choirs as well as Phi Mu Alpha. His love for music led him to sign up for the military band during the junior year of college in 2009.

Financial assistance was the main reason Meier decided to join the military band because of the military loan repayment plan, state and federal programs and the G.I. bill.

“What’s more meaningful is the reason I stayed and intend to stay in the guard,” Meier said. “Similar to Simpson, the National Guard has given me a lot of pretty cool opportunities and experiences to develop and grow into a leader as well. As well as the relationships I’ve been able to build with people in my unit is why I’m staying in the guard.”

Meier joined the military to be a part of the band specifically. He has the opportunity to play different instruments and in different small groups that break off from the larger band and do things he never thought he would experience.

“I got to see people from all sorts of backgrounds and walks of life,” Meier said. “It was amazing, the cultural differences and variety of all the people I met during basic training. It was probably one of the hardest experiences I ever had. I’m really glad that I had it. I wouldn’t really want to do it again, but I’m really glad that I did it once.”

Meier was a large influence on current senior, Ben Lempka, to join the military band.  After persistent recruiting, Lempka decided to give it a try and signed up in 2013. He has played the bassoon since seventh grade and is now able to play for his country.

“I thought it was overall put me in a better place financially, “ Lempka said. “I am a music major as well and I thought what better way to do something for the military and something that I’m studying.”

Lempka has played the bassoon since seventh grade, which prepared him for his advanced training with the military band. He had no problem with basic training because he knew what his end goal was.

“Basic training was fun. It’s a whole mind game. If you have a positive attitude about it, you’re going to get through it,” Lempka said. “You just tough it out. It’s little stressful, but that’s the whole point of it. You have enough time to contact family and if you just keep your eyes on the prize at the end, I personally didn’t have any problems with it.”

He was also in part of the band to play at the governor’s inauguration and said it was his first time doing something like that.

“To be a part of somebody’s initial part of being in office is special on my part and be able to perform that music for them is a big honor,” Lempka said.

Lempka plans to stay in the guard at least through 2018 as his contract allows. He is considering auditioning for an active duty army band in a couple years.

He urges everyone to look into the military because of the experience and opportunities that are available.