In it for the long haul: opera students share look backstage 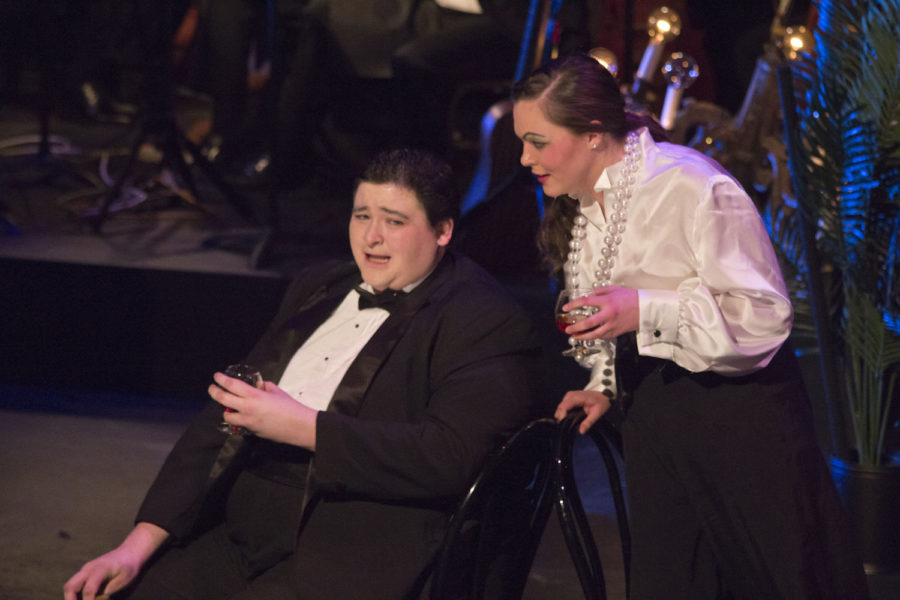 Preparing for a test and organizing a complex schedule can be a stressful experience for the average college student. For the students of the Simpson College Opera, stress can take on an entirely new meaning.

After a successful run with Francesco Cavalli’s “La Calisto,” the students of Simpson’s opera department are returning to their usual, less hectic schedules. But what was it like for these students in the weeks leading up to their premiere? Just how difficult was it to balance the demands of being in an opera and being a student at Simpson?

For first-year Cortez Daniel, a member of the “La Calisto” chorus, every week leading up to the opera took more and more of his time.

For members of the cast with larger roles, the demands on their time were even greater.

“My nights were basically opera. I counted 5:30 p.m. until 11:00 p.m. as potential opera time,” sophomore Evan Braxton Barto, who played Mercurio, said. “I was either in rehearsal or working on stuff for rehearsal. That’s a fair amount of time to work on stuff.”

With so much time spent in rehearsal, opera students had to learn how to juggle the competing demands of academic studies, social lives and relaxation with steadily decreasing amounts of free time. Oftentimes, the opera won out over academics.

“It takes a lot of prioritization. I had to decide whether watching this video for this math class was really as important as getting ready for the opera. What’s more immediately important to me?” Barto said.

For others, it was more of a time management issue.

However, long-term planning in regards to such things as homework and a social life were oftentimes complicated by the lack of a concrete rehearsal schedule. Yet junior Randa Meierhenry, who played Diana in “La Calisto,” explained this vague scheduling as being inevitable.

“At the very beginning we get a really rough sketch of all the blocking rehearsals, but we literally get our schedule for the next day the night before at around 10:00 p.m.,” Meierhenry said. “This is so we can continue to fluctuate the schedule to fit our needs as a cast and work on things we need to work on.”

“I just take it one day at a time. You can’t think too far ahead of anything,” Meierhenry continued. “You just have to focus on what needs to be done.”

However, this scheduling method could at times cause confusion and frustration among members of the opera.

“Sometimes we find that people are there [at rehearsal] because [they] thought they were going to be practicing and the directors just didn’t use them for the entire four hours they were there,” Daniel said. “And that takes away from the time they have at night to do academic stuff.”

Furthermore, some opera students felt underutilized at the rehearsals they were supposed to show up for.

“I know at least two or three people who came… for a four or five hour rehearsal and probably rehearsed for 30 minutes,” Daniel said. “They had to sit there and, in their opinion, waste their time.”

In some cases, the stress and pressure proved too much for members of the opera and frustration ensued.

“I think we had a couple of breakdowns in rehearsal and I actually had a breakdown [too],” Meierhenry said. “I don’t usually do that, but it was just so stressful trying to put the opera together.”

Meierhenry disclosed that she used Simpson’s counseling services as a means of relieving her stress during the course of preparing for the opera.

“I used the counseling services to release all the crap that happened. I [would] go once a week… and just spill [my] guts out to them and then go away,” Meierhenry said. “It’s nice, and I would encourage students to utilize [those services].”

But Meierhenry also emphasized the importance of the cast’s team spirit in helping her, and others, get through the stress and the rehearsals.

“We have a really great support system. Everyone is really nice about pulling together and pushing through,” Meierhenry said.

Even with all the stress, members of the opera still found joy in their achievements in rehearsal and on stage.

“Whatever stress I felt was off-put by much I enjoyed what I was doing,” Barto said.

Students choose to put themselves through the stress that is preparing for an opera, but students not affiliated with opera should still sympathize with opera students.

“Whenever you hear someone complaining about their schedule for the opera, feel for them,” Daniel said. “Try to understand.”

All the hard work and stress paid off in an outstanding performance of “La Calisto” over this past weekend.