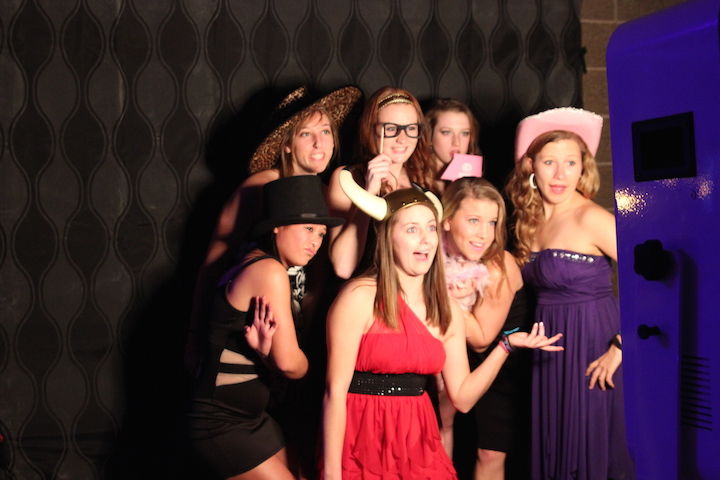 About 250 students throughout the night found themselves in a world of lavish living and grandeur when they entered the Capitol Ball on Feb. 21 in Hubbell Hall.

Based on the Hunger Games books and movies, the Capitol Ball on Saturday night was the third annual all-campus formal at Simpson College. Every year, this dance is hosted by Campus Activities Board (CAB), Residence Life (Res Life) and Religious Life Community (RLC).

“Usually Res Life does the decorations and advertising, Religious Life does food and CAB does the entertainment,” he said.

The idea of a Hunger Games theme was appealing, but needed to happen carefully. Surely students wouldn’t be fighting to the death during the dance.

Instead, the planners pulled from the Capitol, where Panem’s government officials live in abundance and dress in ridiculous and colorful attire.

“It’s so flamboyant and almost like a ball atmosphere the entire time,” Stokesbary said.

To set this scene, Hubbell Hall was decorated with bright colors and themed snacks like “Cinna” Buns, Effie Cupcakes and President Snow’s Punch.

“I was impressed. The food was really good,” first-year Samantha Sweet said.

To capture the memories of the night, students could use the photo booth with props galore.

Everyone had different reasons for attending the dance, whether it was to spend time with a significant other or to have a girl’s night out.

In Sweet’s case, it was to give a friend a new experience, being asked to and attending a dance.

“[My friend] has never been to a dance before,” Sweet said. “So we came for her first dance.”

Sarah Clark, a first-year student, said her favorite part was just being out and dancing with friends.

The planners found the event to be a success, an exciting night full of dancing and memories for all in attendance.

“Food, dancing and a party atmosphere: I don’t think you can really go wrong with that,” Stokesbary said.