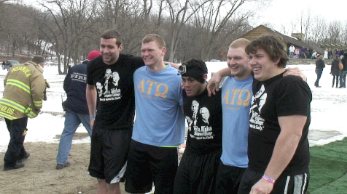 Last Saturday, Indianola hosted the first Polar Plunge of 2015 in the Iowa down at Lake Ahquabi.

The event served as a fundraising function for Special Olympics Iowa, calling for those involved to raise money to support their dive into the icy water, having snow and ice encircling a small pool of water for the dive to take place.

Simpson College had representatives from Kappa Kappa Gamma, Alpha Tau Omega and past and present members of the Simpson football team, lead by head coach Jim Glogowski who braved the cold waters while decked out in his sideline football getup.

While he was concerned about the cold, that wasn’t his biggest concern.

“I just don’t want to eat it going into the water,” Glogowski said. “I hope my life insurance is up to date though. I don’t want to say, this is where the old man bit it.”

For others, the cold lake Ahquabi they frequent during May Term and the summer was almost too foreboding.

“Pray for us,” junior offensive lineman Blake Bergstrom said. “This is going to be chilly.”

Together, Glogowski and past and present Storm football players gathered at the shore, going through their pregame chant:

“For those who came before us, the brothers with us now and for those who come in the following years, we are SC! We are, SC!”

The team scampered in and out of the water in their gameday red uniforms, cold but satisfied.

“It was fantastic and for great cause,” Glogowski said. “It was a little chilly but I survived. Having alumni and current players out there was pretty fun.”

Former assistant coach Paul Davis dressed up in a polar bear suit and helped with the fundraising and organization of participation this year. Working with the Warren County Polar Plunge group, Davis was a part of a team that raised over $3,800 for the event.

After a slew up superhero-dressed Hy-Vee members dipped in the water, Stephanie Lash and Rachel Farner represented Kappa Kappa Gamma in the polar plunge.

“I went completely numb so I didn’t feel it,” freshman Rachel Farner said.

“I have worked with Special Olympics before with track and field and it’s just a really worthwhile organization,” Lash said. “Any money they can get really helps the participants.”

Simpson’s ATO group went last of all groups that participated Saturday, although they were trendsetters, going shirtless into the water, raising $375 for the event.

Andrew Harris, ex-ATO president was nice enough to strap a GoPro onto his head as he was carried on Cody Carlson’s shoulders.

“I’m going to be on Cody Carlson’s shoulders,” Harris said. “The goal is to dip in like I’m being baptized and then run out and get back to the heat.”

The group of five completely submerged themselves as Carlson dumped Harris in the water, the GoPro capturing the moment of submersion and all.

Carlson is on the Simpson swimming team, but this experience in the water wasn’t one that he wanted to last.

“I swim for Simpson and live in the water, but that was stupid!” Carlson said.

The participants ran away not needing any assistance from the EMTs on hand, with no lingering side effects other than having some with articles of clothing and socks being frozen over or to the floor of the warming house at Lake Ahquabi.