Art students get unfiltered insight into art after undergrad 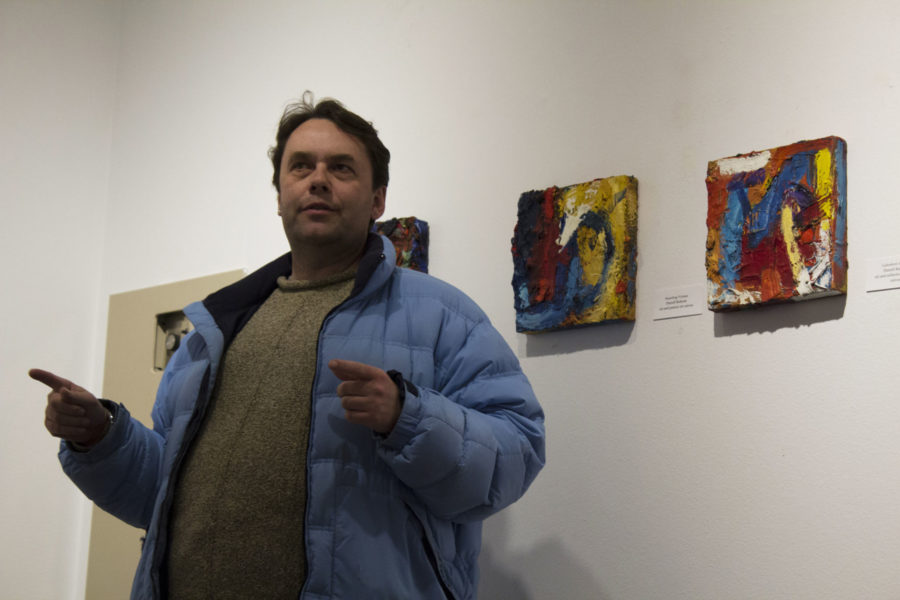 Students are always told not to study art in college; that it won’t lead to a successful career. Darrel Roberts and other artists that exhibit at Farnham Galleries prove otherwise.

Roberts is a working artist, living in Chicago and creating art. With both a bachelor’s and master’s degree in fine arts, Roberts absolutely believes in studying art. Would he do it again? Not at all. According to him, the experience was awful, but necessary.

“The master’s program is much more theoretical,” Roberts said. “I got the academic painting experience, but the master’s really makes you think about what you want.”

This education directed Roberts to focus on his abstract tendencies. Although he still enjoys figurative work, he mainly works in the abstract. Finding a focus, he said, has been part of his success. A large majority of the commissions he’s sold are abstracts.

Discussing his education and his paid work are a way for art students to get a glimpse into being an artist in the real world.

“Listening to artists’ journeys and stories helps me determine what I want to do,” Kaitlyn Louk, a junior art education major, said.

Roberts discussed more than his education and living. He gave students insight into inspiration, motivation and more.

Roberts’ inspiration is the world around him. Living in Chicago, he is often influenced by construction, architecture and nature interacting. These influence his art, in addition to his studio.

“My studio is covered from ceiling to floor in work, materials, things I find on the street,” Roberts said. “I’ll stick anything on the wall if I find color and texture in it, from receipts to packaging materials to construction ribbon to noodles.”

Roberts keeps his studio packed and messy quite intentionally.

“I think it’s important for you to have a place that you can make a mess and leave it,” he said.

Documenting his surrounding and collecting pieces of them are his ways of doing what he loves, something he advises strongly.

“I quit a job one time because they offered me a management position,” he told the students. “I didn’t want my life to become like that, I had to find something else. Anything is possible, you just have to be willing to relocate.”

“I really related to his advice to try as much as possible, and fail a lot,” Nickel said. “I like these talks; it’s good to hear real life experiences from such interesting people.”