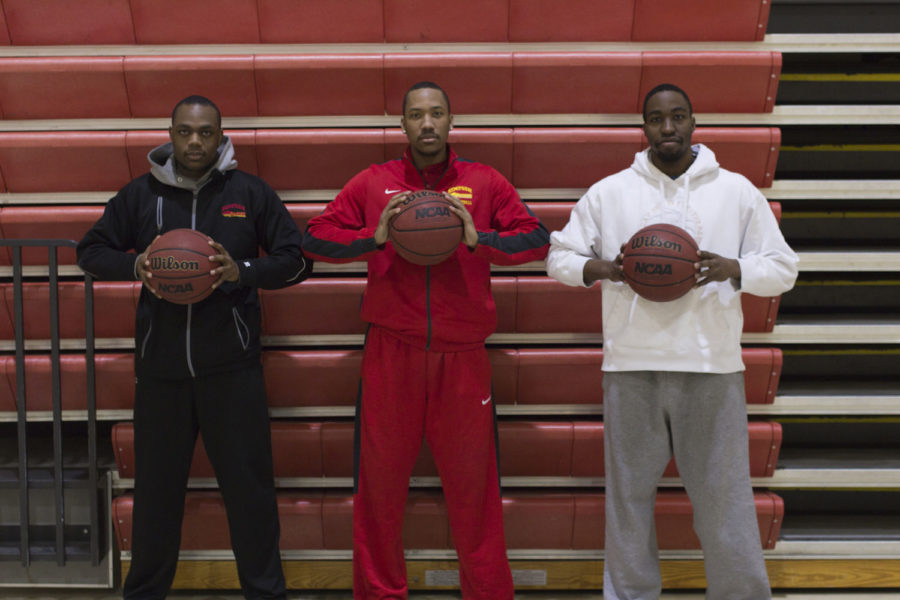 The student population at Simpson College is markedly Iowan and to have students from outside the state is often uncommon. When it comes to sports, that pattern wavers more and it definitely did for this class of men’s basketball seniors.

Charles Swain (Austin, TX), PJ Edwards (Phoenix, Ariz.) and Carlton Moody Jr. (South Bend, Ind.) came from, at the very least, six hours and 45 minutes to a campus in Indianola, Iowa where they made memories as members of the Storm that will last for a lifetime.

“In athletics, the memories weigh much more than our record,” Edwards said. “I’m very appreciative of my teammates and everyone I got a chance to play with.”

Swain mentioned that the brotherhood created from the trials on the court made for a group of teammates that meshed together, despite the differences.

“I did always enjoy meeting the people on the team,” Swain said. “Seeing all these people come from different backgrounds and meshing together was awesome. Everyone got along despite the competitive atmosphere on the court.”

While Swain scored 1,000 points in significant playing time, at 29-73, success on the court as a team was not at the level that these three would have wanted it, although none could deny where Simpson came through off the court and in academics.

“Academically, this is probably the best college for me,” Moody said. “Sports wise I made a lot of friends and my brothers Charles and PJ have been great motivators for me.”

Moody lettered in track for two seasons while majoring in management with a minor in coaching at Simpson. While neither he nor Edwards compiled many minutes at the varsity level, both were given starts on senior night against Loras College on Feb. 21, a special night for them as they joined Swain in the starting lineup.

Head coach Charles Zanders took time after their senior night game to remind the three of the special times with the Storm.

“I went to each senior and talked about how I’m very proud of the fact that all three of them are going to lead productive lives,” Zanders said. “It’s not about wins and losses when it’s said and done. Athletics play a very small part of people’s lives. I don’t want them to forget the special memories: the bus rides, the retreats and the team functions. Those are the things that they are going to remember.”

The three definitely won’t forget a night at the Iowa Energy game the team attended to watch the D-League team play.

Moody expressed how he had always wanted to be part of a halftime show. He would get want he wanted, and maybe a little more.

Sophomore Ryan Skaar was paired with Moody to compete in the classic, head-to-head bubble collision event at the center of Wells Fargo Arena. Let’s just say, there are a couple interpretations as to what happened.

“One of the most fun experiences was at an Iowa Energy game in which Moody and Skaar were in these big bubbles,” Edwards said. “They were supposed to collide head on and of course, Ryan won and CJ just failed. That was the best experience of the season.”

Moody was a little bit more gracious and forgiving to himself in the description of the event.

“I didn’t realize we were going to be going into bubbles, running head on,” Moody said. “Plus, my headgear wasn’t tight enough, so when I fell I hurt myself really bad. In my defense, I wasn’t prepared for that moment. He did beat me fair and square but that was probably one of the most entertaining moments of the season.”

Facebook videos give the most clear, and entertaining interpretation of the scene to put it lightly.

Coming from South Bend, Moody probably didn’t consider Simpson because of the prospects of having this halftime limelight shone on him.

But whether it was Edwards wanting to get out of the southwest to experience something new, or Moody narrowing in on his goals to get a job after school or the chance to play ball for Swain, the three look back on their time at Simpson with good things to say as they prepare for graduation in the spring.