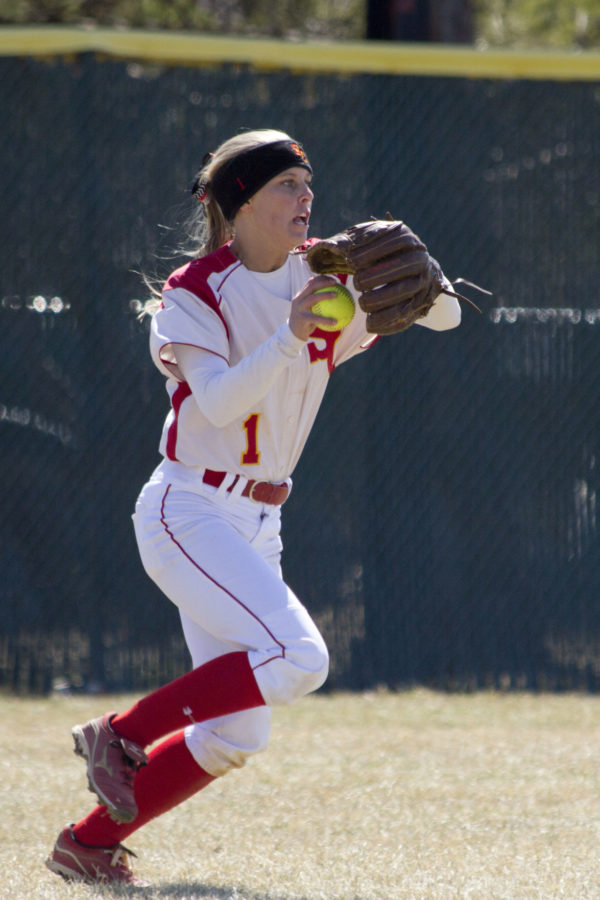 The Simpson College softball team started off the year 18-2 between games in Michigan and Florida and finally had their first chance at wins back in the Hawkeye state Friday and Saturday against a pair of Minnesotan teams.

“It was great being back on our own field,” junior Rachel Guessford said. “There’s no greater feeling than having home field advantage and it gives us a sense of urgency when we play.”

The Storm needed that home field advantage on the weekend as the games were decided by an average run differential of only 2.5 runs as the Storm went 3-1 on the weekend, sweeping Saint Benedict College and splitting with Gustavus Adolphus College.

“I think overall we played well for just getting back into games,” junior Kinsey Van Houten said. “I don’t think we hit to our full potential this weekend, or at least not as consistently as we usually do.”

Just days prior, on Wednesday, Mar. 25, the Storm came in at No. 10 in the National Fastpitch Coaches Association (NFCA) poll, their highest ranking since 2007.

The Iowa Intercollegiate Athletic Conference had two other representatives in the top 25 in Luther College (20-0) at No. 5 and Central College (14-5) at No. 19.

With even bigger targets on their backs, the Storm welcomed the Saint Benedict College Blazers to Indianola on Friday.

Game one went the way of a slugfest as Tori Haag and Britney Steele had back-to-back long balls to uncork a five run second inning, helping Simpson overcome a 2-0 deficit created in the first inning.

Up 7-3 in the top of the 6th, Saint Benedict’s Becky Gingstad hit a 3-run HR to cut the lead to 7-6, chasing starter Abbie VanVleet.

The Storm scored three vital insurance runs in the bottom half of the inning as Riley Fisher earned her third save of the season, getting the final out with the tying run on third base to secure the 10-9.

Simpson had a little bit more breathing room in game two, although they had to win in comeback fashion once again, coming back from a 2-1 deficit in the 3rd inning to score five unanswered runs on their way to a 6-2 win.

Guessford knotted the game up a 2-2 on a single in the third as a fourth inning RBI groundout from Fisher proved to be the game-winner.

Haag went for a big fly again for her eighth of the year to give Simpson a commanding 5-2 lead in Simpson’s three-run fourth inning.

It was a dogfight with the Gusties of Gustavus Adolphus on Saturday as Simpson dropped the front end of a doubleheader to the MIAC foe.

Simpson was held scoreless by Hannah Heacox (1-1) until the bottom of the seventh inning, allowing three runs in the final frame, although it was too little, too late to erase a 6-0 deficit.

Hailey Jensen belted a two-run HR in the bottom of the seventh before VanVleet popped out for the final out of the game.

VanVleet took her first loss of the season as her record sits at 10-1.

Softball played the role of cardiac-kids in the second game Saturday, winning 6-4 over Gustavus Adolphus (8-8)

Down 4-3 in the bottom of the sixth inning, junior Ashley Prettyman put Simpson on top with a clutch, three run bomb to centerfield, capping a 6-0 run after trailing 4-0 until the fifth inning.

Fisher started the game although junior Kaytlyn Ernst threw a perfect 2 2/3 innings in relief to earn the win, improving to 2-0 on the season.

After hosting No. 19 Central on Tuesday in the team’s IIAC opening doubleheader, Simpson heads to Storm Lake for two with the 10-10 Buena Vista Beavers.