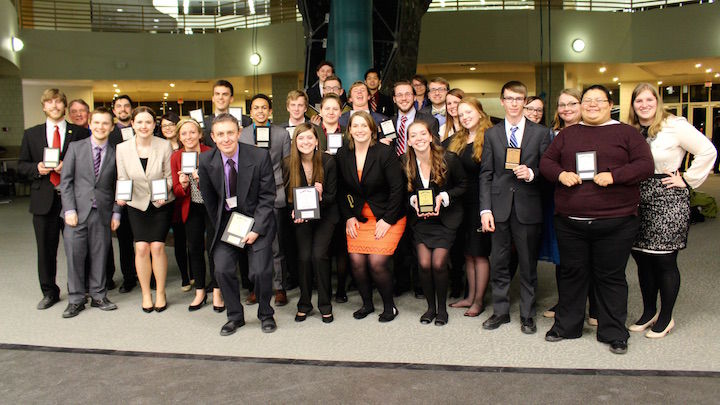 by Steffi Lee, editor in chief

Even when a snowstorm hit Athens, Ohio and changed everyone’s plans it didn’t stop the Simpson College Speech and Debate Team from working hard at the Pi Kappa Delta National Tournament.

The team brought home fifth place in debate sweepstakes out of 75 schools and placed ninth overall.

Head coach Spencer Waugh said seeing his students get rewarded at a national tournament is always a moment to remember.

“We worked our whole season to the point of this moment and to have it pay off and to have new awards, new students earning awards, it was really fun to watch,” Waugh said.

But to him, the award means more than just having his name out there.

“It’s always nice to receive an award and that was cool, but the most meaningful part was that the nomination letter came from a student with quotations and input from the rest of the team,” he said.

It’s that team bond that’s made this year successful, junior Jacy Gomez said. Gomez has competed with the team since her freshman year and received an Excellence Award with her partner, freshman Olivia Anderson.

“It feels really great because my freshman year was the first year when we returned to the Pi Kappa Delta tournament after not being there for many, many years because our team didn’t exist,” she said.

Gomez watched the team grow from only bringing six members to the tournament to having 26 students compete this year.

“It’s the educational aspect that drives us, I think, and also the fact that we’re all really close,” Gomez said.

She said the team debates on topics on both a national and international level, such as the Patriot Act, negotiations with Iran’s nuclear program and racial tensions in Ferguson.

“It is intense,” Gomez said. “I think that my favorite part is the educational aspect, the fact that the topics we get to engage in with other competitors who are probably some of the smartest individuals across the nation.”

The team currently has no seniors and are actively recruiting students who are competing at the high school level for next year.

“We’re working really hard to capture some of the top Speech and Debate talent in the Midwest,” Waugh said.