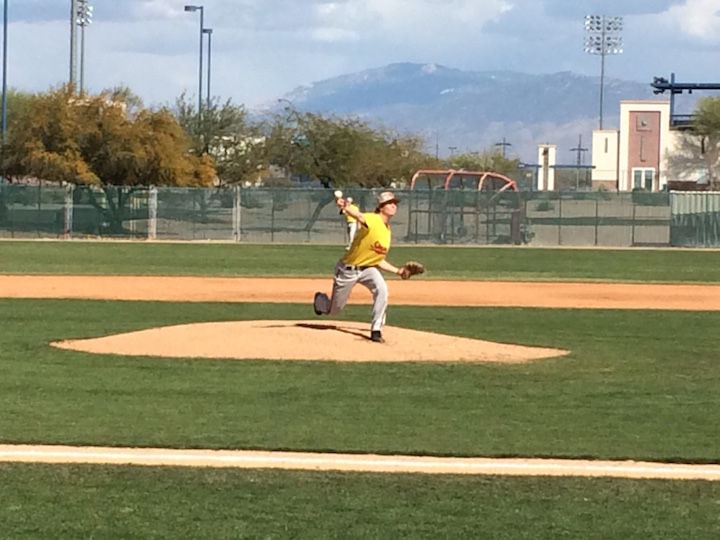 TUCSON, Ariz. – The Simpson College baseball team went 1-1 on Saturday, earning their first game of the season with a 3-2 win over Bethany Lutheran College in the second game of the day.

Daultan Gibson came on in the eighth allowing two walks setting up the game-winning run for the Vikings.

Brock Borgeson relieved Gibson, as the Vikings put a bunt down forcing an error bringing Clay Anderson around from second for the score.

Nick Anderson walked twice and doubled to left as Simpson stranded five runners in the loss.

The Storm stranded nine runners in the first four innings but managed to generate just enough offense to earn their first win of the season, winning 3-2 over Bethany Lutheran (1-1).

Jake Scieszinski pitched 6 1/3, allowing just two earned while striking out four and walking none to earn the win.

Simpson drew first blood, scoring in the second inning on a Jake Esdohr single to left, bringing in Keegan Branin.

The Storm came back in the third, going up 2-0 on a Bud Smith single that brought in Noel.

Back to back doubles from Lucas Herd and Adam Geiger in the fourth inning plated the Vikings first run.

Simpson added an insurance run in the top of the sixth, which proved to be the game winner. Esdohr scored on a Gage Reis sacrifice fly to make it 3-1.

Things got dicey in the seventh. After getting the first out, Scieszinsk allowed two consecutive singles leading Simpson the Borgeson to look to get the final two outs.

A hanging splitter ended in the corner, driving in two to make it 3-2 with runners at second and third, owing a good relay from Burlin to Harmon to keep the Vikings from tying the game out.

Borgeson then struck out the next two batters to end the threat and earn the save.

Simpson left 10 runners on base but had three players with multi-hit performances. Esdohr and Anderson both had two hits as Smith went 3-4.

Riley Fisher and Abbie Van Vleet continued their dominance on the mound as Simpson beat Hiram College, 5-2 and Marietta College, 1-0.

Simpson jumped out to a 4-0 lead by the fourth inning behind a 2 RBI, 2-3 performance from Taylor Davis.

Hiram (0-2) scored two runs in the seventh inning although 5-0 deficit was too much for the Terriers to overcome. Van Vleet won her fifth game while hitting two doubles and scoring once.

Simpson got another dominant pitching from their pitching staff, this one coming from Fisher who struck out six and gave up just one hit in the win.

Stacie Brown and Rachel Guessford both had two hits, although the game winning run came in the bottom of the sixth from Guessford’s bat, driving in Grace Hall with a single down the left field line.

Fisher closed out the door in the seventh, striking out the final batter of the game as Marietta threatened with a runner on second.

Simpson will practice and have a junior varsity game on Monday, followed by an off-day on Tuesday before continuing with games against Wesleyan (Connecticut) and Cornell College on Wednesday.

Fisher also improved to 5-0 on the season as Simpson bumped their record up to 12-0 with Washington College and Husson College coming up on Monday.

Simpson is No. 25 in the nation after starting the year unranked.