Iowa pollster J. Ann Selzer: “There is pressure to be like everybody else” 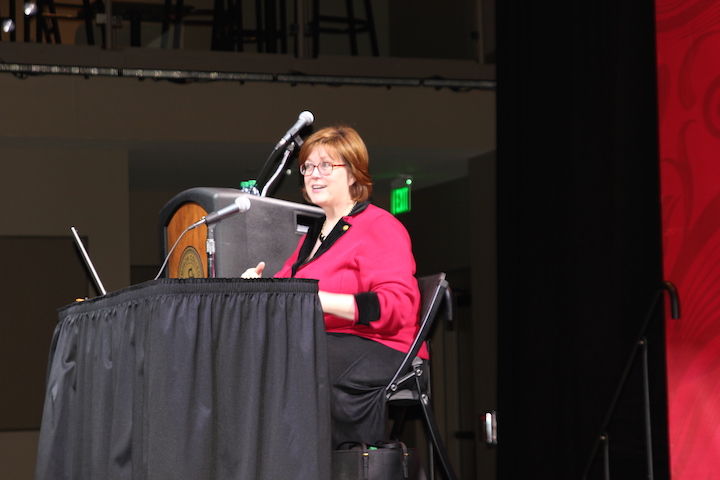 While addressing Simpson students, faculty, staff and area community members, public opinion pollster J. Ann Selzer said one of the largest pains in the industry is conforming to other polls.

Selzer is the president of the Selzer and Co., a Des Moines based public polling company best known in Iowa for its Iowa Poll, a public opinion poll focusing on congressional and presidential campaigns in Iowa. Selzer is known for calling the 2014 U.S. Senate election, the 2008 presidential election and was named one of the nation’s top statisticians as one of the best pollsters in the game.

Selzer said while producing poll results for candidates the biggest stress that can come from the public is her poll not adding up to other national polls such as the Gallup or Quinnipiac.

“When your poll does not look like everybody else’s poll than everybody wants to have a fit and say your poll is no good,” Selzer said.

Selzer ran into this issue in the 2014 midterm election when she predicted US senate candidate Joni Ernst winning the election by seven points.  Ernst ended up the senate position by 8.5 points.

The Des Moines pollster said in close elections it makes sense to show voter margins closer together as other polls do so they can recover if the votes swing the other way from what their poll is showing.

“To be out there as an outlier I can tell you it’s an uncomfortable place to be, so there is pressure to be like everybody else,” Selzer said.

Sezler also told the crowd that one common question she receives is what the life of a public opinion pollster is like.

Her answer: “We think about the truth all the time,” Selzer said. “The best news I can give a client whether it’s a polling client or a private client is the truth.”

Selzer said to deliver the truth pollsters must plan, execute, publish and worry, putting extra emphasis on the worry.

“I’d like to say the secret to my success is to worry and typically that’s a lot,” Selzer said.

Selzer added, “Things can happen between the time we publish our first poll and election day, things that aren’t in our control.”

The Simpsonian was able to sit down with Sezler before the event and speak briefly about the 2016 first in the nation presidential caucus and importance of public opinion polling.

Q: What’s it like to poll the first in the nation Iowa Caucus, an event our state really prides itself on.

A: I cam back to Iowa specifically because I wanted to poll for the caucuses. I was on the Des Moines Register staff at this point, and this is the epicenter of American politics for a short period of time. And who wouldn’t want to be in the middle of that? You get close to caucus time and there is kind of a pulse. You just get a feeling that people are excited.

Q: What excites you about this caucus season?

A: I think anytime you have an open seat that’s exciting because you’re going to have the hottest debates that you can have. It’s just a different kind of fell than when you have an incumbent. I like the wide openness of it and anything can happen.

Q: What do you feel is the importance in public polling?

A:  It’s really a piece of American democracy; it’s sort of your chance and your voice to get the attention of people who matter. You might not be able to get an appointment with your congressman, or your mayor, but your voice can be counted in polls and elected officials and candidates pay attention to polls.