A Skype with history: Students use technology to interact with a survivor of the Holocaust to learn culture, language and life lessons 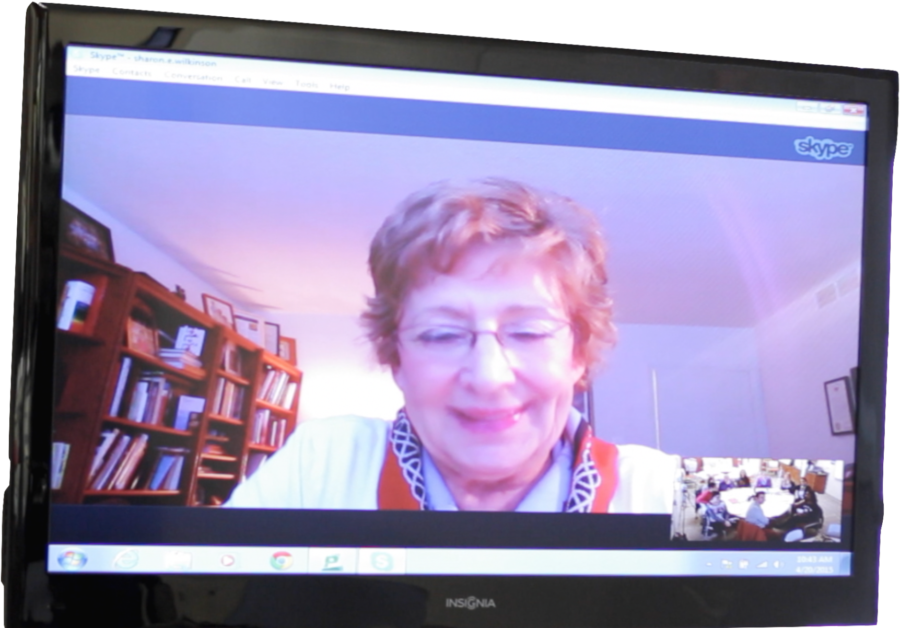 Life during World War II in Europe was somber and unfathomable, especially for the Jews desperately trying to escape the Nazi war machine that sought to eliminate them.

But what we know from a textbook only scratches the surface of what really happened during the horrendous ethnic cleansing that came to be known as the Holocaust.

One course reaches beyond the primary sources and artifacts that have been left behind.

Students in the class “France in History” read the biography of Madame Ruth Kapp Hartz, “Tu t’appelles Renée” (Your Name is Renée), and discovered life during the war from a French perspective.

After reading the book, they had the opportunity to Skype with Hartz to gain a deeper understanding of the Second World War.

Hartz was only three years old when the war began. Her family relocated from German-occupied Paris to southern France and eventually ended up in the town of Arthès.

The title derives from Hartz’s name change to Renée because her given name, Ruth, is a Jewish name of Old Testament origin, and thus put her and her family in danger.

Throughout the story, the Kapp family flees from one home to another with the aid of the French Resistance, a movement that opposed the Nazi occupation of France and the collaborationist Vichy régime led by Marshal Philippe Pétain.

The family is forced to separate and young Hartz is sent to an orphanage that hid Jewish children. After a difficult period of separation from her parents, she is reunited with members of her family — at least, the ones who were lucky enough to survive.

As a child during the war, Hartz could not imagine why anyone would want to be Jewish. It seemed to her that all of her family’s problems stemmed from their Jewish identity.

Fast-forward to the present day, Hartz lives in Philadelphia with her husband and has children and grandchildren.

She is a member of a Reform Jewish congregation and holds her beliefs dearly. And now, she has captivated the hearts of those who read her book.

Professor Sharon Wilkinson, who teaches the course, says, “I obviously have a goal for people to use their French for practical purposes, and so this is a great motiving tool to use French because we have the opportunity to talk to someone who was really there.”

Wilkinson noted that the current generation will be the last one to have the opportunity to talk to those who lived during World War II.

She explains that the Nazi regime operated on fear, and people who witnessed the horrors — whether they were persecuted or not — find it too painful to talk about the war.

“I think it’s really an exciting opportunity to talk to someone who has that living memory,” Wilkinson said. “Mrs. Hartz is somebody that feels that it’s very important to talk about that time period, despite the fact that it was obviously traumatizing, and she’s willing to. That’s fairly rare.”

Now, Hartz continues to share her experiences with people on both sides of the Atlantic.

“I think that the only defense we have [against intolerance] is education,” Hartz says. “Otherwise, as you know, history can repeat itself, and unfortunately, it does repeat itself. So, the only way to fight against intolerance and discrimination is to make sure the facts are known… because there are a lot of [Holocaust] deniers out there.”

These deniers claim the Holocaust never took place which, as Hartz points out, is a lie that dangerously misrepresents the reality of World War II.

She goes on to say, “when someone is in danger of being attacked or persecuted, we need to try to do something and not sit back and do nothing.”

Quoting Eli Wiesel (author of “Night” and Nobel Peace Prize winner), whom she describes as “the voice of the Holocaust,” she explains, “The opposite of love is not hate, it’s indifference.”

Hartz says that when people are being persecuted, we must not reman indifferent. She admits that this view is idealistic but offers a global message that people are capable of doing what needs to be done.

Students benefited from the experience and saw the technological advances as means of rediscovering history.

Sophomore Sidney Griffith, said, “I really enjoyed the Skype session with Madame Hartz! I think it was a great opportunity for us to interact with her and ask questions about her experiences in France during World War II. It was incredible to finally meet her after learning her story, and I’m thankful that she was so willing to discuss it with us.”

“It was such an incredible experience being able to talk to Madame Hartz via Skype,” Dawson said. “You hear a lot about concentration camps when referring to the Holocaust or World War II, so it was particularly intriguing to listen to someone talk about their experiences of being a child in hiding and the roller coaster of experiences they endured and how clear those memories still are decades later.”

When Hartz moved to the United States in the late 1950s she witnessed racial segregation  and the period of Jim Crow laws.

“There was, and still is, a lot of racism in the United States, but it was far worse back then, and I was very shocked,” she said. “I know there has been progress, but there is still a lot to do.”

As for her message for future generations, Hartz says, “We are all human beings. We need to evaluate people not by their religion, the color of their skin or their family, but by the humanity of each person. We need to have a heart rather than indifference.”