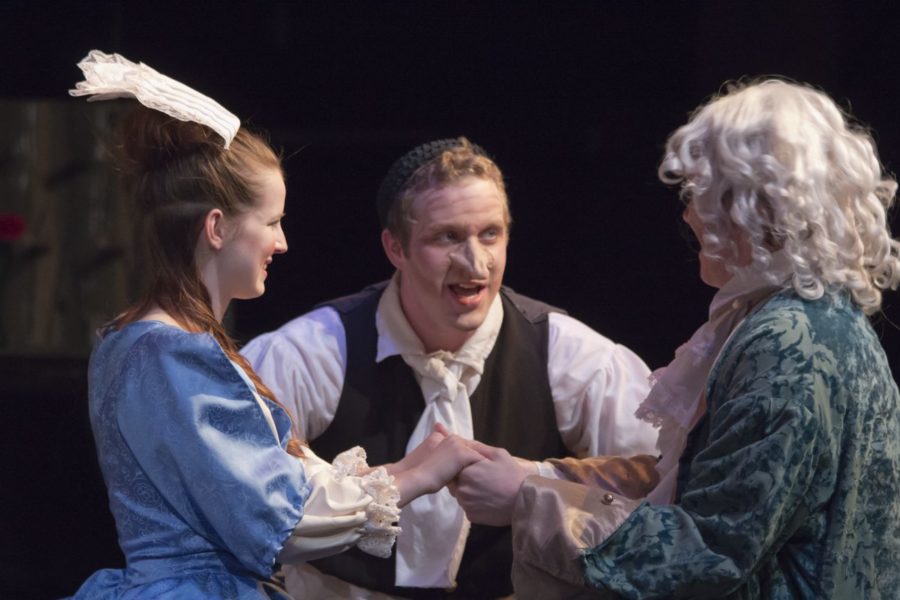 Simpson Theatre presented its annual Festival of Short Plays titled “Wholly Moly Molière” on April 16 and 17 at 7:30 p.m. and on April 19 at 1 p.m. in the Barnum Studio Theatre of the Blank Performing Arts Center.

The festival consisted of three short plays with intermittent comedy skits between them, all of which were directed by theatre students Stacie Kjellsen, Madison Densmore, and Tim Williams. The shows were all in the style of commedia with characters often wearing masks.

“It’s a style that arose in Italy in the 1500s where they’re in a marketplace setting and people would try to get peoples’ attention to buy their stuff by putting these actors on stage being all silly,” Densmore said.  “They’d have to capture the audience’s attention in, like, three minutes.”

“One actor would play one stock character and that was it. So their mask would be their character. They’re putting on the same character every time,” Kjellsen added.

Next up was the play directed by Tim Williams, titled “The Flying Doctor.” In order to marry the man she loves, a girl hired a man to impersonate a doctor and distract her father. The situation became sticky when he claims to be his own twin brother and the father asks to see the two of them together.

Densmore closed the festival with her play “Two Precious Maidens Ridiculed.” Two girls wanted to experience romance before getting married. They attempted to seduce and win the hearts of two men, who were actually interested in each other. Peppered with sexual innuendos and Disney references, it was enjoyable and hilarious.

Taking leadership positions in the Festival of Short Plays is a requirement for Simpson students majoring in theatre. According to seniors, the experience is invaluable.

“I learned that I can put together a show and actually direct it and collaborate with all of my peers. And I think we got people excited about theatre, which is very cool. It’s something that we’re always trying to do,” Kjellsen said.

“When you’re in the theatre you have to work with so many different people, and putting together a show you don’t always know what you’re doing,” Densmore said. “But now we know all these things about commedia and we can see it in a bunch of different things that I never saw it in before and make those connections and use the acting style and the performance style.”

The festival was a great opportunity for students across campus to get involved in the theatre. With less to prepare and smaller casts, students could sample Simpon’s theatre department.

“We also tried to be a lot more inclusive and get more people involved on campus with theatre,” Densmore said.

In the end, nothing is more rewarding than a job well done, and Kjellsen couldn’t agree more.

“It was super fun and we’re super pleased with how it went. We’re very proud,” she said.