Living the Dream and Marching for Change 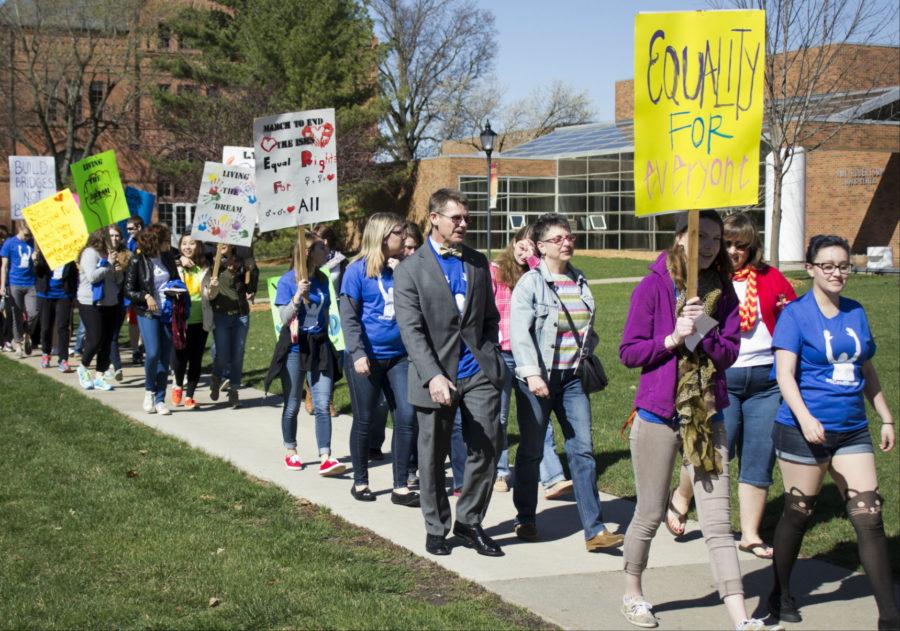 Simpson College has progressed in the years since 1890, when George Washington Carver became the college’s first African-American student. The campus has strived to accept students of diverse backgrounds with open arms and to remain innovative.

Still, students are surrounded by headlines and news stories dealing with issues of injustice, racial profiling, gender inequality, abuse, discrimination and oppression. They see racism, sexism, classism and many other forms of oppression in their own lives and in the lives of others.

However, students are fighting back.

Valeria Gonzalez, freshman student studying global management, participated in the rally. She said, “Being racist or sexist and putting people beneath them just because they think they are superior is something that has to end.”

In the past, the rally has been planned by student organizations. This year, however, Walter Lain, assistant dean of multicultural and international affairs, and Carolyn Dallinger, department chair of sociology and criminal justice, decided to offer a course that would handle the planning process.

The course, Social Justice in Action, encourages students to learn more about and explore the issues within racism, sexism, heterosexism, classism and other negative ‘isms.’ According to Simpson’s course registry, students involved worked together to enact a social justice action program. Some of these tasks included obtaining permits, finding a range of speakers and collecting donations from the community.

Austine Nelson, sophomore sociology major, helped plan the rally. Her personal goal was to battle ableism. She has been interested in ableism for the past year as a result of her brother being born with Down syndrome.

“I really liked being able to help a cause I am personally invested in,” she said. “Anybody can jump in and find something they are passionate about and that is what is really nice about [the rally].”

Nelson said they also did a lot of research about poverty, privilege, current events and other readings related to the ‘isms.’

“We had to work together to do all of this,” Nelson said. “We put in a lot of time to plan it, and it isn’t for our benefit. It’s for everyone’s benefit. It’s a campus-wide event so people can support the causes they feel passionate about.”

The day started with a gathering outside of Kent Campus Center. The crowd listened to several speakers before picking up signs and starting the march. The group walked across campus, to Indianola’s town square and back.

Many students carried signs with quotes like, “The Founding Fathers Were Immigrants,” “There is No Life Found in Violence” and “Love Unites All People.”

“I really enjoyed when we walked around the plaza with those big banners,” Gonzalez said. “I believe it is important to raise awareness.”

After the group returned to Kent, the crowd listened to a few more speakers, including students, faculty and administration, dealing with issues related to the ‘isms.’

Simpson College president, Jay Simmons, spoke about how the school supports and encourages activism. He referenced the recent shooting of Walter Scott, where a white police officer shot and killed an unarmed black man. He also talked about a case where a transgendered woman is being forced to serve jail time in a male prison, resulting in sexual abuse.

Jennifer Nostrala, department chair of theatre arts, talked about a course she will instruct during May-term, dealing with sexual assault. The class, Agents of Change, allows students to research, write and produce a performance that will be used as part of incoming student orientation in the fall. It will focus on ending sexual harassment and assault.

Lain and Dallinger also spoke to the crowd as both professors and Simpson alumni. Dallinger reminisced about a time when she tried to encourage the administration to hire faculty of color. She also said this area still needs work, but that the campus has come a long way.

Gonzales said she has not been mistreated as a result of her ethnicity, but that she has been affected by these issues. “Sometimes I feel that people think less of me because my English is not as good as others,” she said. “It is frustrating not being able to say everything I want because sometimes I lack the vocabulary.”

In addition, the rally included performances. Sophomore Lauren Myers performed spoken word poetry about sex trafficking and sophomore Jordan Beem sang a collaboration of Over the Rainbow and What a Wonderful World.

When the speakers concluded, professors David Wolf and Mark Green, along with Tommy Green and junior Caitlin Featherstone-Priester, took the stage and performed as a band. As they performed, the crowd was invited to eat donated food from the community and socialize about their experience.

While there were a lot of students and faculty involved in the march, both this year and in the past 12 years it has taken place, students and people in general continue to face ‘isms’ during their daily lives. Despite fighting back against the ‘isms,’ the battle has not been won.

Simpson still has a long way to go before racism, sexism, ableism, classism and other isms are overcome. The college continues to face these issues and look for ways to implement change.

For example, all 23 Simpson presidents who served since the college’s founding have been white men. No women or people of color have served in this position. In addition, despite representing over half of the student population, according to Frederick, only one woman has been voted SGA president in the past 10 appointments.

The march may not solve the problems, but according to Nelson, it serves as a great first step.

“I know a lot of people don’t know where to start with ending an ism, and this is a great place to start,” she said.

Racism and sexism played the biggest roles in the rally. Most of the speakers touched on these issues and most signs were related. However, Nelson said it is important to realize there are a lot of other isms affecting people. Ableism and classism, for example, are not as widely talked about but are still important to support.

She also said more schools should adopt a similar rally. “It gets the word out there and gets people thinking about it,” she said. “It’s so beneficial and would be to any school. If students don’t know the problems exist, they wont know what they can do about it.”

Gonzalez agrees and said, “I think the ‘isms’ should be stopped. All the different types of discrimination going on around the world are affecting many lives.”

Nelson encourages students to take the course at some point in the future, and it will become available again next spring. She said, “It’s been not only eye-opening, but mind-opening.”

Gonzalez believes it is important for the ‘isms’ to not affect the way you think about yourself. She said, “I have learned to love who I am and to know that I am not less than anyone else just because some society standards say so.”

Some believe change starts when people make it happen, as was said numerous times in various ways during the rally. The amount of participation in the march indicates students want change.

This sentiment makes the future of ending the ‘isms’ seem hopeful. As Simpson continues to progress, a statement from the college’s Zenith Diamond Jubilee Yearbook of 1935 stands true: “The past has been noble; the present offers great hope for the future.”