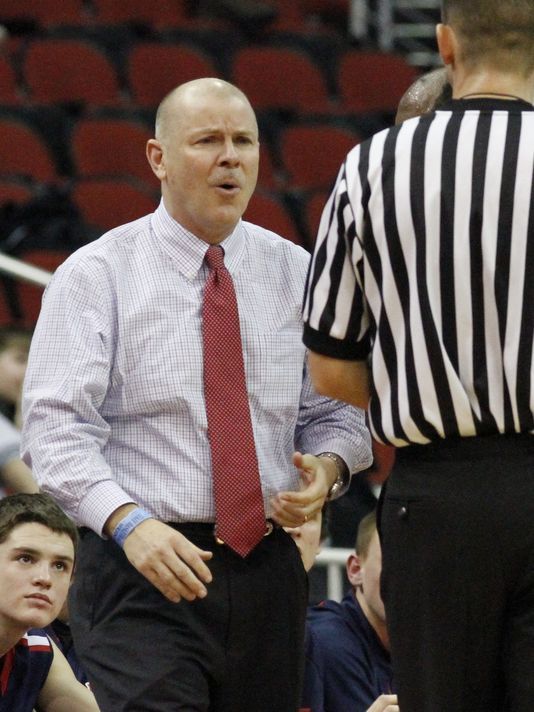 Bjorkgren takes the place of Charles Zanders who finished 6-19 (1-13 IIAC) last year, concluding a stretch of five straight under .500 seasons.

With over 100 applicants, eight were interviewed — six through the phone and three brought to campus, one of which was assistant coach Brandon Stromer. However, it was Bjorkgren who took the cake in the hiring process.

“I’m thrilled to [have Brad],” Niemuth said. “His experience as head coach for almost 27 years while accumulating 400 wins is huge. I think that the respect he holds from the coaching community is big. My phone has just blown up with congratulations about getting Brad.”

For Bjorkgren, the hiring at Simpson is a bit of a homecoming, graduating from Simpson in 1983 with while earning two varsity letters during his time, one of which resulted in Second Team all-Iowa Conference honors.

“It’s a dream come true,” Bjorkgren said. “While it was difficult [to leave Urbandale] I’ve been thinking about when I got into the coaching business that it’s something that I had in the back of my mind. You think about it at times but you don’t know if you ever are going to get the opportunity.”

Bjorkgren’s performance leading the Jayhawks certainly gave Simpson a reason to give him the opportunity to fulfill this dream, going 398-213 in 27 years as head coach of Urbandale High School boys basketball.

In that time Bjorkgren:

-Was named CIML Coach of the Year 8-times

-District coach of the year 7-times

-Appeared in four 4A State tournaments, finishing 2nd in 2001

“I’m excited to move forward with Coach Bjorkgren and have heard nothing but the best about him,” Montgomery said. “I expect good things to come in the future.”

Through this track record, one can be sure Bjorkgren has established deep roots in the recruiting field as he looks to make Simpson a contender this season, commenting that “he owes it to the senior class” to make Simpson a winning team this year.

“The recruiting will be huge just because of his name recognition and the respect other coaches have for him,” Niemuth said.

Bjorkgren, who is still under contract to complete his teaching duties at Urbandale High School, is “burning the candle at both ends,” traveling south to Indianola many nights to attend meetings and other duties.

He has even begun the recruiting process, wasting no time to get a jump on the season, emphasizing his message that he doesn’t want the season starting Oct. 15 for his players – steps will have to be made earlier.

While Simpson has slowly reached out of state to recruit, getting their latest 1,000 point scorer, Charles Swain, from Austin, TX. Bjorkgren wants to continue to make an effort to expand beyond the Iowa borders, looking for students with the right fit at Simpson and the right fit on the basketball team.

On the court, Bjorkgren wants to give his players some autonomy while having them play an up-tempo but controlled brand of basketball.

California-kids may even be on the horizon for Bjorkgren where his nephew Nate is head coach for the NBA D-League team, the Bakersfield Jam.

If it means going to the Golden State to get talent to win, Bjorkgren would do it. But in the end, he wants his players to represent Simpson, his alma mater, with integrity.

“The three main things I want them to do is represent Simpson with class and create some excitement [on the court],” Bjorkgren said. “I want them to play hard, play together and have fun.”

While things have changed at Simpson since his graduating year of ’83, Bjorkgren mentioned that they were good changes and he is ready to be apart of it.

“Things have changed but they all have been good changes,” Bjorkgren said. “I’m just so excited and honored.”