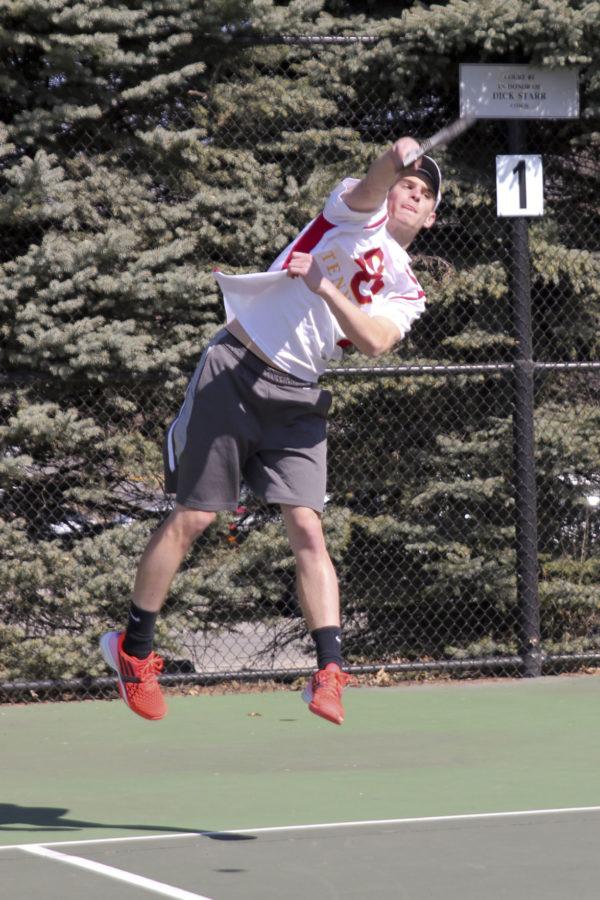 Getting off to a slow start on the season, it’s been hard for the men’s tennis team to recover as they’ve fallen to 3-10 on the year, having their last win on Mar. 15 against Onondoga Community College.

The Simpson College men’s tennis team will get a clean slate on Saturday though as they host Loras College and the University of Dubuque in the first matches of the IIAC season.

The Storm will have to do so without singles No. 1 from last season, Zach Kusick, who has only played in three matches this season going 2-1 in singles play, being limited by a left ankle injury.

“My left ankle is not doing good,” Kusick said. “It feels healthy but structurally it is unstable. I will need to get a Brostrom surgery in early June in order to bring it back to 100 percent.”

Kusick suffered the injury to a series of ligaments during winter break.

Despite his limitations, Kusick mentioned the chance for him to play in a pinch is if the team is in a tight match in need of another win.

“There is a possibility that I might play with a lower position because either the team really needs me because we have a chance of winning,” Kusick said.

The junior from Westminster, Colo. went 10-10 last season and is 23-22 in singles for his career, the lone multi-year player with an above .500 career record.

Competitive in nature and a cerebral player, Kusick expresses the difficulty in not being able to be out there on the court, although he has channeled some energy to being the team’s player-coach.

“Since I’ve been out I’ve been helping coach and I believe this team can get a lot better,” Kusick said. “We just need to work on some more issues in everyone’s game.”

Despite the poor team start and Kusick’s injury, the Storm have shown promise in their youth.

Freshman Connor Barnard is 7-7, combining for a 8-6 doubles record with senior Jeff Armstrong.

Adam Weiser and Aaron Smith, both freshman, have also chipped in, both going 5-9, getting valuable experience for coming years.

Rietgraf and Kusick took on the duties as captains this season, being slated at No. 1 and No. 2 in the team’s singles lineup.

Rietgraf, a career 25-32 player in singles, is just 5-10 this season at No. 1, obviously having to shoulder more challenging positions in the role. The adjustment is tough, but Rietgraf sees it as a positive in the long run.

“I may not have the best record in singles this year but I feel like playing at No. 1 has helped me become a better player,” Rietgraf said. “I’m looking forward to next season.”

While positive details are in place for next year, the Storm have a lot left on their calendar in 2015, having seven IIAC matches remaining en lieu of the conference tournament on May 1 and 2.

The road in conference begins at 9 a.m. in Indianola on Saturday as the Storm welcome two struggling teams from Dubuque.

The Loras Duhawks come in at 0-9 on the year with their closest match being a 6-3 loss.

Dubuque is not doing much better at 4-9, winning their last match well over a month ago on Feb. 28 against Lakeland College.

The Spartans did win 6-3 over Knox College earlier this season, a team Simpson lost 5-4 to back in February.

“The Loras and Dubuque meets will be tough but important this weekend,” Rietgraf said. “Dubuque has several new players this year so we are not sure what to expect but we know it will be a tough meet. Loras has a similar lineup to last year and I think we will have better chances against them.”