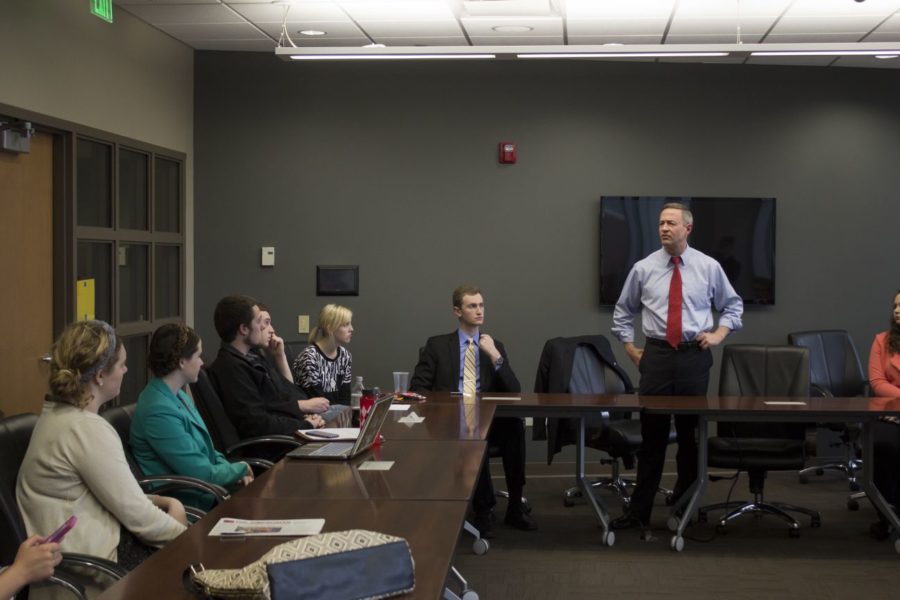 Although he hasn’t announced a run for presidency, former governor of Maryland Martin O’Malley isn’t wasting time – he made a stop at Simpson College during his trip to central Iowa.

Compared to the reactions to Donald Trump’s visit from students the day before, it’s safe to say O’Malley was met with a more enthusiastic crowd.

“I just really liked how he really had answers for everything,” sophomore Tyler Stokesbary said. “I was expecting the usual, which is skirting around the subject, or giving some vague answers. That’s usually what politicians do. But he was committed to his ideas already, which is great.”

During his speech, O’Malley reflected on his time as Maryland’s governor and explained how his policies rebuilt the state.

“Many states decided they would double down on those economic theories and tried to cut their way to prosperity,” O’Malley said. “In our state, we chose a different path. We actually invested more in education than we ever have before and we made our schools the number one public schools in America for five years in a row.”

O’Malley said when he served as governor, investing more in education and infrastructure resulted in a quick rate of job creation.

“Our country’s at a crossroads right now; jarring for our American psyche is this unpleasant fact of life of the economic life that we share,” O’Malley said, referring to the imbalance in job creation and take-home pay.

Students who packed the Senate Room in Kent Campus Center to listen to O’Malley asked him questions on education, immigration policies and financial management.

Junior MacKenzie Bills opened up the question and answer session, asking about how O’Malley would attack the student debt crisis, especially due to Iowa’s high rate compared to other states.

“I was wondering what kind of steps you would like to take as president or what initiatives you would push to help lower that for us Iowans,” Bills said.

O’Malley responded with an idea similar to how homeownership works.

“You should be able to refinance student loans the way you can refinance a house,” he said.

He also talked about versatility in how colleges can better understand students’ needs, suggesting online learning and building on college credits in high school.

“If we can bail out the big banks, we can figure out how to refinance student loans,” he said.

“None of the things we did were popular, they were all singularly unpopular,” he said. “We had to disengage a lot of the inflationary formulas.”

Beyond education, O’Malley also covered immigration reform and what he envisions can be changed in both criminal justice and equality issues.

O’Malley also touted openness and transparency in the criminal justice and political systems.

“I think as a nation we need to start tracking police-involved shootings,” he said. “It’s always been my experience that openness and transparency is a huge help.”

After his stop at Simpson, he spoke at the Summerset Winery in Indianola.

Those who are unsure of who to back in 2016 are interested in what the different politicians traveling through Iowa have to offer.

“What’s really unique is that it seems like a lot of people are saying Hillary Clinton is the frontrunner for the Democratic nomination for president,” Simpson alumnus Taylor Van De Krol said. “But it’s nice to see there are other people who are willing to come to Iowa.”

In an interview with The Simpsonian, O’Malley said he’s interested in garnering the youth’s attention and continuing his connections with younger people.

“Younger people tell us where our country’s headed,” he said. “The most successful leaders learn to speak to where we’re going rather than where we’ve been.”

Whether he’ll run for president? We’ll find out soon.

“I’ll make a decision by the end of this spring,” he said. “I’ve been seriously considering making a run for president and Iowa’s not getting any smaller.”