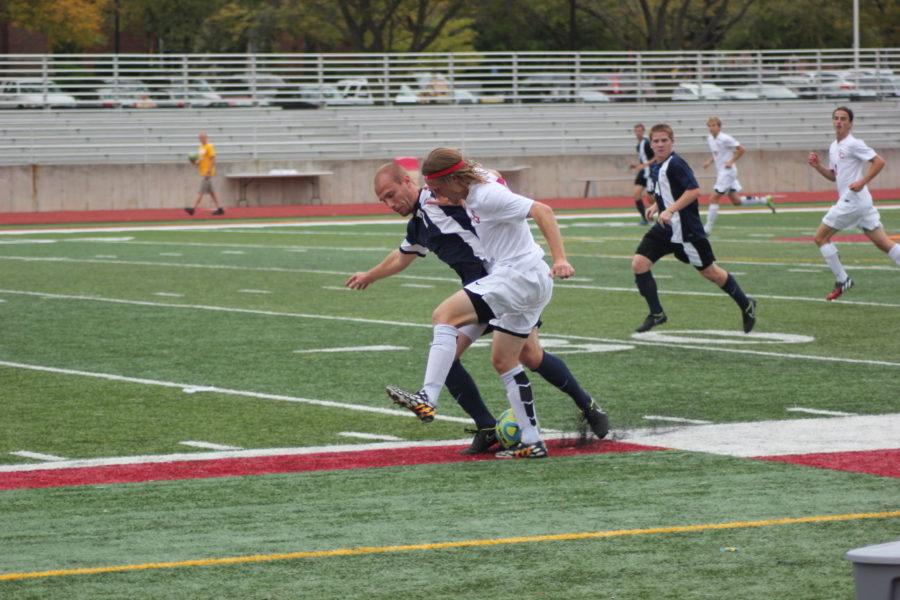 Simpson men’s soccer gave a good Saint John’s (Minn.) team a run for their money at home on Sunday. The final score was 2-1 Saint John’s, but the numbers, nor even the play on the field, tell the complete story.

But, close wouldn’t cut it as a breakaway-deciding goal from Daniel Bruckbauer that deflected off goalkeeper Zach McEntee’s fingers and into the net in the 76th minute sent the Johnnies home with a 2-1 win.

Simpson trailed 1-0 at the half, but senior senior midfielder Marcus Varnum (2) scored off of an assist by sophomore midfielder Nick Joslyn just seconds into the second period to knot the game up.

Varnum had a big weekend, also scoring Saturday in a draw against Bethel. “He’s been doing a nice job for us, creating goal scoring opportunities,” head Coach Rick Isaacson said.

The Storm and Varnum alike came within inches of scoring numerous times as the half but none of Simpson’s 12 second half shots could make their way to the back of the net.

Josh Harry rattled one off the crossbar before Garrett Pochop missed two shots in succession, one that caromed off the post as Simpson missed out on seemingly five near goals.

“We outshot them and held an advantage in corner kicks and most of the offensive statistical categories,” Isaacson said. “I thought we played well today, it was just an unlucky result.”

Saint John’s tied 0-0 with No. 11 ranked Loras yesterday, who was predicted to finish first in the vaunted Iowa Intercollegiate Athletic Conference this season. Simpson kept it close against a formidable team and they are optimistic about the rest of their season.

Men’s soccer won’t have much time to dwell on the loss as they regroup for a road matchup with Nebraska Wesleyan University (4-0) in Lincoln, Neb. on Wednesday at 8 p.m.